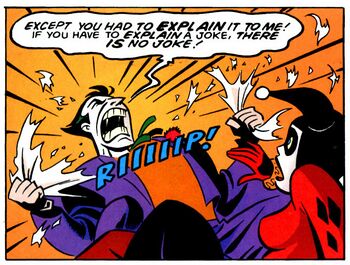 It seems jokes are something The Joker doesn't like to kill. Get it? It's because he's a criminal with a comedy theme!

Explaining a joke, for better or worse, can come in a number of variants:

Note that the lines between these can be blurred. And despite the title, sometimes you can get away with explaining the joke. A way is hinting to the pertinent parts of the joke. That way you don't have to actually explain it completely.

It's very common to have the character explaining the joke wink at the audience, which can lead to homicidal mania towards winks.

Do not confuse this for giving the context. This is actually explaining the punchline, not the setup. That also means don't pothole this for the necessary information.

A Sub-Trope of Measuring the Marigolds.

Compare If You Know What I Mean and Euphemism Buster (close cousins of Variant 3), "Just Joking" Justification. Often goes with an Incredibly Lame Pun, and is how such pun can lead to a Collective Groan.

Contrast Stealth Pun (where absolutely no explanation is given), Am I Right?, and No Sense of Humor. See also Leave the Plot Threads Hanging. Not at all like Anti-Humor jokes, where the whole point is that the listener doesn't get the joke. Oh, wait, did I just explain the joke?.

Why did the troper cross the road? To get to the examples! (The joke is that there are examples below this point.)

Retrieved from "https://allthetropes.org/w/index.php?title=Don%27t_Explain_the_Joke&oldid=1957601"
Categories:
Cookies help us deliver our services. By using our services, you agree to our use of cookies.