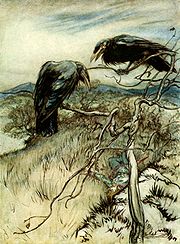 They're dark. They sound ominous. They'll eat just about anything they can find, including dead bodies on the battlefield or corpses hanging from the gallows.

Corvids (crows, ravens and jays) are serious—and seriously creepy—wherever they show up. (Except for the Idiot Crows.) In most of their fictional appearances, they are the go-to scary bird (at least when vultures aren't available), and are traditionally associated with death in some mythologies and cultures.

A group of crows is a murder; a group of ravens is an unkindness or conspiracy (and rooks are a building, jackdaws are a clattering).[1]

On the other hand, corvids are also very clever. This is Truth in Television, as the Beecher quote shows. They may feature a crow as the Deadpan Snarker or the Trickster Mentor. While crows and ravens are genuinely capable of speech in Real Life, their speaking voices are almost cartoonish, sounding nothing like the harsh voice of their cawing.

Because they are so visually similar, in many visual media it can be hard to tell whether the bird in question is meant to be a raven or a crow (note that some Old World crows are gray with black head and wings; in Eastern Europe, where this subspecies is ubiquitous, no troubles exist telling ravens from crows). There is little if any difference in how they are treated; however, ravens are more likely to cross over into Big Badass Bird of Prey territory).[2] They'll often have the behavior of a crow, but be called "ravens" because the word "raven" sounds more badass.

Corvids suffer from a strange sort of form of the Conservation of Ninjitsu. A single crow will probably be intelligent (and, if one of the bad guys, will also take an unnerving interest in the heroes). On the other hand, a whole murder of crows/congress of ravens will just be mindless animals possibly under control of something or someone external. Of course, the significance of various numbers of corvids is the subject of some Older Than Feudalism superstitions. Sometimes corvids are shown more-or-less positively (although ravens are usually (but not always) more likely to be heroic characters than crows), and in this case their traditional characteristics are portrayed in a better light. Heroic ravens are often wise or intelligent characters, while crows tend to be friendly tricksters or Plucky Comic Relief.

On the other hand, crows (never ravens) are a staple of The Golden Age of Animation, appearing in countless funny cartoon shorts set on family farms, where their role is to drive farmers nuts gobbling up their corn crops. Cartoon crows are always played for humor and aren't the slightest bit scary, though they can certainly be annoying to the farmers (and the occasional living scarecrow). They tend to be Screwy Squirrel tricksters.

Crows and ravens tend to fall under the Trickster Archetype. What Measure Is a Non-Cute? is a matter of some disagreement. For more creepy birds, see Feathered Fiend, but also see the note on scavengers in Carnivore Confusion. See One for Sorrow, Two For Joy for magpies, closely related both in Real Life and in tropes. For black feathers used as symbolism, see Feather Motif.

Shout-Outs to Edgar Allan Poe are so commonplace as to be cliche.

"Corvid" is not to be confused with "covid".

Examples of Ravens and Crows include:

Retrieved from "https://allthetropes.org/w/index.php?title=Ravens_and_Crows&oldid=1876064"
Categories:
Cookies help us deliver our services. By using our services, you agree to our use of cookies.