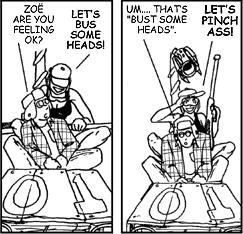 Whatever they're about to do, she's burned up for it.

Omi: He who is last to be laughing laughs most loudly!


Raimundo: What Omi did to that sentence is what we're going to do to you!
—Xiaolin Showdown

Mastering a foreign language is hard. It's difficult enough learning the surface syntax, the grammatical forms, and the vocabulary. A foreign visitor must not only master the language, but learn the local customs and color. Having accomplished all this, the final barrier remains: figurative language. Idioms, metaphors and similes are wildly different from culture to culture, and cannot be reasoned out.

An easy way to show that a character is an outsider or foreigner, then, is to have them mutilate figurative language. This language is taken as literal and/or distorted into near unrecognizability. Of course, this is almost always hilarious.

In reality, it is not unusual for Blunt Metaphors Trauma to be caused by literal translation from a known language, such as "having one's ass circled in noodles" (though, simple misunderstandings are also a frequent cause of this trope). But in TV Land, it's more often done by taking an existing expression from a language/culture different from the character's and replacing its words with synonyms from the same language, something highly improbable in real life.

This trope is perhaps the most common way to show a character is from a different (literal or metaphorical) place. Usually, they are foreign nationals, but they may have grown up in Cloudcuckooland, or just have No Social Skills.

Compare Malaproper, Expospeak Gag, Sidetracked by the Analogy, and Either World Domination or Something About Bananas. Literal-Minded characters are pretty much the embodiment of this. Threat Backfire is a possible result of this.

Examples of Blunt Metaphors Trauma include:

Huxley: Why don't you take your job, and shovel it.
John Spartan: "Take this job and shovel it"? Close enough.

"I have to go to the jack."
"I am sick of wearing the dress in this family."
[Howard] "Don't tell me its laser is still armed." [Ben] "Bimbo."
"Keep that power on or I'll beat the living headlights out of you!"

"Using a metaphor with Ridcully was like waving a red flag in front of -- like showing something very annoying to a person who was annoyed by it."

Myria: Oh. They [Wienrich & Boettcher] make chocolate?
Susan: Does a bear poo in the woods?
[Lady LeJean looked thoughtful for a moment.]
Myria: Yes, I believe that most varieties do indeed excrete as you suggest, at least in the temperate zones, but there are several that-
Susan: I meant to say that, yes, they make chocolate.

Ax: Spicy, right? This flavour-or-or-is called spicy?
Rachel: Yeah, it's spicy. Hot, too.
Ax: Yes, the temperature is hot. Hot-tuh.
Rachel: No, I meant the flavour is hot. The temperature too, though. Skip it.
Ax: Skip?
Rachel: Uh, no. Forget it. Drop it.
No sooner were those last words out of my mouth than I regretted them. Ax promptly dropped the container of refried beans he'd been holding. It landed wrong side down on the table.

Marco: That girl is warm for your form. She wants your body.
(Later) Ax: I would like to shuffle my artificial hooves to the music with you. But you cannot have my body. My bo. Dee.

One of the squires in attendance upon the coach, a Biscayan, was listening to all Don Quixote was saying, and, perceiving that he would not allow the coach to go on, but was saying it must return at once to El Toboso, he made at him, and seizing his lance addressed him in bad Castilian and worse Biscayan after his fashion, "Begone, caballero, and ill go with thee; by the God that made me, unless thou quittest coach, slayest thee as art here a Biscayan."
Don Quixote understood him quite well, and answered him very quietly, "If thou wert a knight, as thou art none, I should have already chastised thy folly and rashness, miserable creature." To which the Biscayan returned, "I no gentleman!—I swear to God thou liest as I am Christian: if thou droppest lance and drawest sword, soon shalt thou see thou art carrying water to the cat: Biscayan on land, hidalgo at sea, hidalgo at the devil, and look, if thou sayest otherwise thou liest."

Dr. Taylor: Are you sure you won't change your mind?
Spock: Is there something wrong with the one I have?

O'Neill: "I full well expected the other shoe to drop eventually."
Thor: "We can only hope that this will be the last footwear to fall. "

Lt. Colonel Mitchell: Well, you've got to open big, catch people's attention, make them think the whole thing is going to be jam-packed.
Vala: Ooh, I love jam.
[Mitchell, Jackson and Carter look at her]
Vala: Oh, I get it. It's yet another playful twist on words in your "earth" language.
[A little later, when she is asked what she thinks of the script.]
Vala: Well, it certainly seems to be packed full of jam!

O'Neill: We'll cross that bridge when we come to it.
Bra'tac: No, the bridge is too well-guarded.

Sheppard: Well, that's why we're a team, like the Fantastic Four.
[Ronon and Teyla stare at him]
Sheppard: It's a comic book where superheroes fight crime and stuff. See, I'd be Mr Fantastic, Ronon would be The Thing, McKay would be the Human Torch...
Sheppard [to Teyla]: You'd be the Invisible Woman.
Teyla: I am not invisible.
Sheppard: No. No, and McKay's not a human torch.
Teyla: Well, how come * you* get to be Mr Fantastic?
Sheppard: Because he was the leader and I'm the...

Ziva: Ducky, drip it!
Ducky: Do you mean "drop it" or "zip it"?
Ziva: Ah, American idioms drive me up the hall!
Ducky: Well, actually... never mind.

Cote: ...but then you took me home and we totally clicked...
Michael: That sounded bad.
Cote: You totally...
Michael: I drove you home.
Cote: Okay, you drove me home and...
Michael: Your dad's gonna see this...

Trance: [...] patching him up is easy as cake.
Dylan: Easy as pie.
Trance: Are you sure about that? I think that making pie is a lot harder than cake.

Lucifer: "Chock full of Ovaltine, are we?"
—Lucifer: "Sam Winchester, This Is Your Life!"

"What is that charming human expression? A fly in the... lotion?"

Ann: "Hopefully with two Cardians on our side this episode we'll succeed some way."
Alan: "I'm not so sure. Like the humans say, I would not hold my dick about it."
Ann: "...No. You... you mean 'breath.' Hold your breath."
Alan: "...Why would I hold my breath if I could hold my dick?"

Omi: (to Wuya) The jig is down, you are at the top of your rope, spoon over that Wu!
(very, very, VERY long pause and everyone is looking around at each other waiting for someone to say something then cuts to Jack with his finger on his chin thinking)
Jack: Oh, Oh I got it! The jig is up, you are at the end of your rope, fork over the Wu! (does a little victory dance and opens his jacket which has a ribbon that says "Boy Genius")

Omi: (To Jack) I demand that you spill your internal organs now!!
Jack: (screams) What kind of sick people are you!?
Raimundo: I think he means spill your guts.

Omi: Dojo, keep your ears on the game!
Raimundo: Omi you've gotta be doing that on purpose.

Antoine: She was making me a bookcase!
Rotor: You mean basket case.