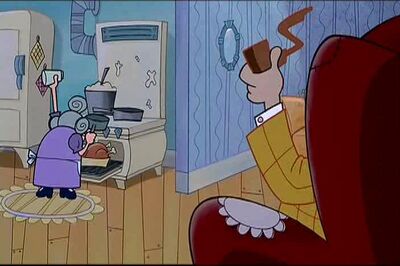 With speed and dexterity astonishing for a woman of her advancing years, Mother bastes the turkey, tosses the salad, and mashes the potatoes!

That's what the sign had said, anyway. And so, as if compelled to do so, the Troper sat down at his computer screen and began to type...

A character, sometimes part of the story proper and sometimes completely external to it, who acts either as the storyteller or as a framing device. A Narrator always breaks the Fourth Wall, explicitly addressing the audience to tell them the story. Sometimes the Narrator is also responsible for presenting An Aesop to the audience at the end of the story, as in The Twilight Zone and its imitators.

To be a Narrator, the individual must directly relate to the story in some way, if only as the person telling it. For example, Alfred Hitchcock was not a Narrator for Alfred Hitchcock Presents, because his footage was independent of and had no bearing on the story or stories it appeared with. Rod Serling was a narrator, because he specifically introduced stories, often provided a lead-in to set them up, and provided a closing after the story footage ended; in one episode he actually was in the story, explaining how it was clearly ridiculous fantasy until the protagonist hears him and burns an envelope with his name on it, causing him to disappear.

Sometimes the Narrator can also take on aspects of a Greek Chorus or be otherwise weird, but a pure Narrator does not offer opinion on the action, he just lays it out—and occasionally delivers a punchline or moral. A Narrator is one of the primary ways of providing Exposition.

Examples of Narrators include: