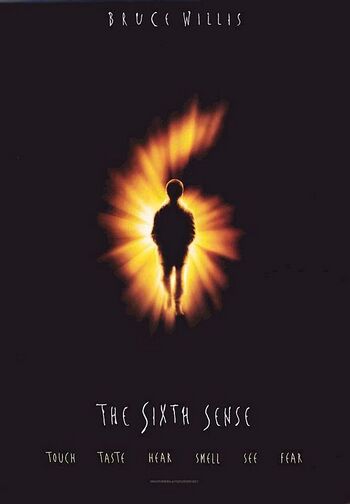 Successful child psychiatrist Malcolm Crowe (Willis) is shot and injured in his home by a disturbed former patient of his; the disturbed man commits suicide immediately following the shooting. Months later, a still-shaken Malcolm comes across the case of ten-year-old Cole Sear (Osment), who is exhibiting exactly the same symptoms of his former patient: frequent panic attacks, social withdrawal, and unexplained injuries. Seeing a chance to redeem himself by helping Cole, Malcolm takes a special interest in -- and begins counseling -- Cole. Learning the secret behind Cole's condition, however, only makes things stranger than Malcolm could have imagined.

Osment was nominated for an Academy Award for his role in the film.

The film is famous for its twist, for people ruining the twist, and for no longer being a twist at this point. If you've somehow managed to avoid any of the spoilers for this movie, and you ever plan to watch it, you should probably stop reading this page now (when this film was new, the Twist Ending was genuinely a startling surprise for most viewers who hadn't encountered spoilers beforehand).

Tropes used in The Sixth Sense include:
Retrieved from "https://allthetropes.org/w/index.php?title=The_Sixth_Sense&oldid=1555792"
Categories:
Cookies help us deliver our services. By using our services, you agree to our use of cookies.