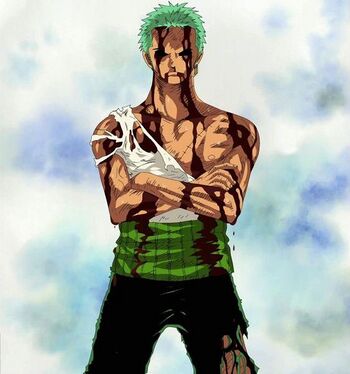 He's all right. Just get him some bandages.

Simply put, damage is done to characters that really, really should hurt them but is easily shaken off. Nobody ever breaks a rib or other bones unless that specific broken bone becomes important later on. Note, this isn't Super Toughness or Nigh Invulnerability, where the character actually is supernaturally protected from harm. This is the ability to shrug off blows that would disintegrate a human body when you technically shouldn't be able to. So Robots, Mutants, Mages, Ki using Martial Artists do not count. Having a story-enabled reason for not being a bloody smear immediately takes one out of the running for this trope. It can also be argued that certain Required Secondary Powers may also induce this. (For example, how can someone whose sole power is throwing flame take being thrown off a multi-story building?) If someone does not literally have "increased strength and endurance" in their portfolio, then they count. The line really gets fuzzy between Badass Normal and Charles Atlas Superpower where somehow a "normal" person has become something that does not exist in Real Life.

This trope also allows our hero to take a bullet in some critical area (chest, shoulder, etc) and continue to fight as though nothing had happened, even if they should be Overdrawn At the Blood Bank. It also makes you wonder why, for all the supposed beatings they have received themselves over the course of a show, the hero/heroine never suffers any long-term scarring or lasting physical injury. See Hollywood Healing and Only a Flesh Wound.

Modern special effects are somewhat to blame for this, as they make it all look more dramatic. This sometimes approaches cartoon-esque extremes, such as smashing through concrete or walls. Being Punched Across the Room, for example, doesn't do as much as you might think.

Between them, Made of Iron and Hollywood Healing cover the two main varieties of action hero—the Terminator-type that can walk unscathed through a bomb-blast, and the hero who gets hurt badly but somehow always manages to come back and triumph in the end.

One especially tenacious example is the lack of punch drunkenness, with Nancy Drew and Jimmy Olsen getting knocked out several times in each of any of hundreds of adventures with no long-term brain damage to show for it. Indeed, unrealistic lack of damage from head injuries is the widely prevalent subtrope Hard Head.

Punch-drunk boxers are the classic real-life example of what happens to someone who takes repeated pummeling damage in many fights year after year. However, the American National Football League presents a better sampling. To survive more than a couple of seasons in the league is a guarantee of a lifetime of painful, lingering damage to battered joints, bones, and connective tissues. That life is also going to be about ten years shorter than that of the average adult American. The heart and body organs build up scar tissue likely to fail when the athlete is in his fifties and sixties. This is known as Dented Iron.

The polar opposite of this is Made of Plasticine. When the character doesn't just shrug off extreme damage but doesn't sustain any damage at all is Made of Diamond, a subset of Nigh Invulnerability. Characters who are Made of Iron, if they die at all, often die Rasputinian Deaths. If two Made of Iron characters go up against each other, it often leads to How Much More Can He Take? fights. Not to be confused with Maid of Iron.

A character who is Made of Iron isn't necessarily literally made of iron.

If a person has this kind of durability as a superpower, it's Super Toughness. See also, Normally I Would Be Dead Now.

Examples of Made of Iron include:

Marv: Is that the best you can do, you pansies?

V: Did you think to kill me? There's no flesh and blood within this cloak to kill. There's only an idea. Ideas are bullet-proof.

Drago: He's not human. He's like a piece of iron.

Walter's boys just gave me a beating that will have them waking up sore in the morning. I should be on death’s door. Walter thinks so. And you probably think so too.

Hartigan: Just one hour to go. My last day on the job. Early retirement. Not my idea. Doctor's orders. Heart condition. Angina, he calls it.

Inigo: Offer me everything I ask for!
Rugen: Anything you want!
Inigo: (stab with sword) I want my FATHER BACK, you son of a bitch!

But the life in me was stronger than the life in common folk, for it partakes of the essence of the forces that seethe in the black gulfs beyond mortal ken.

"I won an Olympic Gold Medal with a broken freakin' neck."

"I have removed the bullet. And three others, a blowgun dart, two shark's teeth, a tip of a bayonet, a twisted paperclip, and a meager handful of buckshot. You may want to learn how to duck."

"Did you honestly believe that a mere 39 gazillion tons of red hot metal and duct tape would crush me?"

"I don't know whether you fully understand that I have just been shot; but it takes more than that to kill a Bull Moose."

He was getting nailed from all sides during the fight -- his helmet was destroyed, his shield was bristling with arrows, he was stabbed in the shoulder with a javelin, hit in thigh by a sword, and fucking shot in the left eye socket with a goddamned arrow. Amazingly, this only made him more ripshit pissed off. He pulled the fucking arrow out of his own eye, threw it down, and resumed with the asskickings like a blood-lusted cyclops.