Everything About Fiction You Never Wanted to Know.
Jump to navigation Jump to search
/wiki/Bruce Williscreator 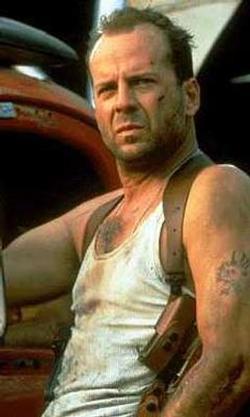 An actor, producer and musician known for his Manliness.

Seriously, Bruce Willis was once known for his work in comedy, such as in the popular comedy/drama/mystery series Moonlighting. During the show's run, Willis was also hired to do wine cooler commercials, no doubt making people go "Hey, it's that guy!"

His big break came when he played a resourceful, smoking, snarky NYPD officer named John McClane in the thriller Die Hard. People were at first surprised and skeptical when they heard of his casting, since he was mostly known as a funny guy, as well as that annoying guy from those wine cooler commercials. Playing McClane with a mix of humor and sympathy and performing most of his own stunts, Willis proved he had the chops as a serious action star, and Die Hard was a hit that jump-started a blockbuster franchise.

Before and following his success on Die Hard, Willis was a mildy successful pop singer for a brief period of time, most notably under the persona of Bruno (no, not that persona).

Since Die Hard, Willis has had a healthy film career, alternating between action, comedy, and even straight-up drama. In many of his action movies, Willis is the king of the heroic comeback, and usually has one scene where the bad guys work him over badly, only for him to come back in the final reel and win out. This was perhaps best codified in 1994's Pulp Fiction in which he plays a down and out boxer who bets the money he took to take a fall on himself and earns himself a very bizarre day, only to come through in the end and ride off into the future on a chopper with his girl by his side. It's also worth noting that the ending of Bruce's story arc is also technically the end of the movie itself, at least as far as the strict continuity of events is concerned.

He also co-founded the Planet Hollywood restaurant alongside fellow action movie titans Arnold Schwarzenegger and Sylvester Stallone. Appropriately, all three shared the big screen for the first time (although Willis will just cameo) in 2010's The Expendables.

A frequent collaborator with Quentin Tarantino.

Bruce Willis has performed in the following roles: