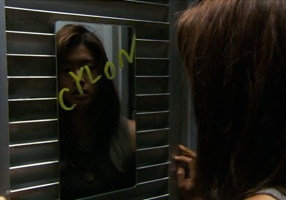 Our protagonist is going through a perfectly normal day. Only... something's wrong. The people around him are acting just a bit off. They keep mentioning a string of words, or are trying to herd him to a certain place.

It looks like the town's been taken over by Puppeteer Parasite, and our hero's the only one left. He attempts to either escape and warn the outside world, or find where the invaders are coming from and shut it down.

But once he gets there, he discovers the horrifying truth: HE'S the fake! Cue screams of "What Have I Become?!" A robot, a clone, a ghost or nearly one, or some other duplicate that forgot he wasn't the real thing, or was programmed to believe that he was, complete with Fake Memories of a Conveniently Unverifiable Cover Story.

In an ongoing series, it'll be a duplicate of one of the main characters. In a self-contained work, it'll just be someone who thinks they're human. Either way, it's an effective inversion of Puppeteer Parasite. Assuming the duplicate works through the immediate suicidal tendencies (and/or murderous intent of others) they may find themselves having to ask a Trial Balloon Question to see if "their" friends and family would still accept them.

Variation of the Tomato Surprise, hence the name. (Note the key difference is that here, the character doesn't know they're a tomato.) Compare I Am Who?, which is (usually) a much more pleasant surprise. The opposite of this is And Then John Was a Zombie. See also Expendable Clone and Dead All Along. For extra oomph, expect the tomato to break the mirror in frustration. If the surprise is the character discovering that they were the villain all along, that's The Killer in Me.

This is a Twist Ending Trope. Expect your tomatoes to be spoiled!. Sometimes overlaps with Robotic Reveal.

Examples of Tomato in the Mirror include:

Then you find out that the reason she'll be flying instead of walking is because she's a ghost. Her husband shoots her in the last verse.

Retrieved from "https://allthetropes.org/w/index.php?title=Tomato_in_the_Mirror&oldid=1936575"
Categories:
Cookies help us deliver our services. By using our services, you agree to our use of cookies.