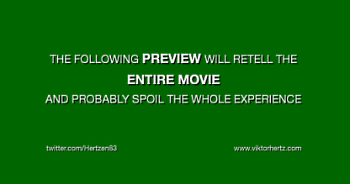 Movie Trailers are known to mislead, but sometimes they go in the opposite direction, giving away key plot points and twists (and sometimes what would have been a Twist Ending). The odds of this happening increase for the commercials aired after a movie's opening weekend.

Of course some of this depends on your definition of "Spoiler". Given that a trailer consists mostly of clips from the movie itself, a fair bit of spoilerage, in this case footage from a later part in the movie, is often inevitable. There is also the matter of context. An action movie, for example, may show a fight scene between two characters, then you actually see the movie itself and realize that the other dude the hero was fighting happens to be his best friend in the beginning, thus the trailer has clued you in to a betrayal of some sort occurring before you even knew it. So if you read the examples below from a movie you haven't seen (either you have no intention of seeing it, or maybe you should reconsider continuing past this part), and find yourself thinking "I didn't even know that was a spoiler", don't worry about it.

A related phenomenon often occurs with DVD menu intro screens. DVDs will often introduce their menu screens with montages from the movie/episodes, or clips of scenes that are particularly flashy or dramatic. Often these will give away major plot points before the viewer has a chance to even start the film. These can be even more effective at spoiling the film's plot than trailers, since a viewer might plausibly be expected to go days between seeing a trailer and finally seeing the related movie, which might give them a chance to forget things from the trailer. With menu intro screens, on the other hand, the viewer is being shown clips from something that they are moments away from watching.

Also related are the trailers which run immediately previous to the show you have already sat down to watch. Some shows give a "Next, on X:" segment, spoiling you on things you would just know in the next 30–60 minutes on a show you have already decided to watch. These are intended to pull in the new viewer, but can seem unfair to those already into a show as you are most likely to be already watching at the beginning of the episode.

Can lead to Trailer Joke Decay. See also Spoiler Opening and Late Arrival Spoiler. Compare The Namesake, when the title itself may be a spoiler. Or just see Spoiler Title.

Examples of Trailers Always Spoil include:

Retrieved from "https://allthetropes.org/w/index.php?title=Trailers_Always_Spoil&oldid=1931492"
Categories:
Cookies help us deliver our services. By using our services, you agree to our use of cookies.