Everything About Fiction You Never Wanted to Know.
Jump to navigation Jump to search
/wiki/Tom Bakercreator 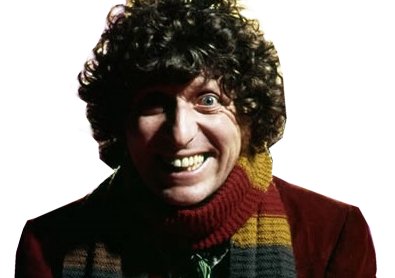 Would you care for a jelly baby?

Thomas Stewart Baker (born 20 January, 1934) is Doctor Who. An old story goes that if you don't know what Tom Baker looks like, all you need to do is close your eyes and think of the Doctor... and that's him. Curly hair, floppy hat, long multi-coloured scarf and toothy grin. Instantly recognisable. Even today, over thirty years since leaving the role, he's generally accepted as being the best-known of any of the first thirteen actors to have played it, and has only been surpassed in popularity by David Tennant; even newer and/or younger Who-fen, for whom Tennant is their iconic Doctor, list Baker as the Classic Doctor. Certainly he was the longest serving (seven years in total), so he is embedded in the public consciousness better than most of the others.

Born in Liverpool, Baker initially studied to become a monk, but he dropped out when he realised that a life of isolation wasn't for him. He gravitated towards acting, mostly as an understudy on stage. He gained plaudits for his role as Grigori Rasputin in Nicholas And Alexandra, and this led to several other film and television roles, among them the evil magician Koura in the movie The Golden Voyage of Sinbad.

Nevertheless, the forty-year-old actor was working on a London building site as a bricklayer (and, by his own account, was of "no fixed abode") when he got lucky. Very lucky. Being known socially to the head of BBC drama and his wife (no sniggering at the back please), Baker's name came up in discussion as a possibility when the producers of Doctor Who were looking for somebody to replace the departing Jon Pertwee. A meeting was arranged between Baker and the two men who were in overall charge of the series, producer Barry Letts and script editor Terrance Dicks, both of whom took an immediate liking to the actor.

At the time of his casting, Baker was by far the least well-known actor to have ever played the Doctor. William Hartnell, Patrick Troughton and Jon Pertwee had all been much-loved character actors, even before playing the role, whereas Baker had largely been a supporting artist. It's somewhat ironic, therefore, that Baker ended up being the longest-serving and best-known of them all. His portrayal of the Doctor was (and remains) iconic: Baker himself attributes his success to having played the role as that of a Man Child, similarly to Harpo Marx.

In 1981, Baker left Doctor Who, handing over the reins to Peter Davison. Accounts vary on exactly why he left. One popular story is that Baker tendered his resignation to the new producer of the series as a joke, believing that his massive popularity with the public would never see it accepted, only to be surprised when the producer replied "Sure... when do you want to leave?". Commentary in the "New Beginnings" DVD boxed set suggests that John Nathan-Turner, the new first-year producer of the series, felt that Baker had gotten complacent and overbearing on set and tried to rein him in. Baker wasn't fond of many of the changes Nathan-Turner began making and suggested to him, as he had done with other producers in the past, that perhaps it was time to move on. He expected to be asked to stay on, but was half-surprised when his offer was accepted.

Baker also maintained his Doctor persona to a large extent in public, never smoking or drinking in public and making frequent in-character appearances as the Time Lord.

He subsequently made several appearances in productions as diverse as Blackadder, Sherlock Holmes, and the Dungeons & Dragons movie; as well as the role of Puddleglum in the BBC adaptation of The Silver Chair by C. S. Lewis, I shouldn't wonder. He has found a niche as a voice actor in recent years (that's him doing the narration in Little Britain and the opening cutscene of Hostile Waters), but he will forevermore be known as the Doctor.

In late 2013, he made a new appearance as the Doctor in the Doctor Who 50th anniversary special, "The Day of the Doctor"; surprisingly, it wasn't, strictly speaking, as the fourth Doctor, but as a future regeneration who had chosen to "revisit old favorite faces", and was now retired and serving as the curator of a Royal art museum.

Baker married one of his former Doctor Who co-stars, Lalla Ward (who played companion Romana II), shortly after they both departed the series. The marriage didn't last very long. Neither wishes to elaborate further, and she is now happily married to Richard Dawkins, whom she met through Douglas Adams.

Retrieved from "https://allthetropes.org/w/index.php?title=Tom_Baker&oldid=1653339"
Categories:
Cookies help us deliver our services. By using our services, you agree to our use of cookies.