Everything About Fiction You Never Wanted to Know.
Jump to navigation Jump to search
/wiki/C. S. Lewiscreator 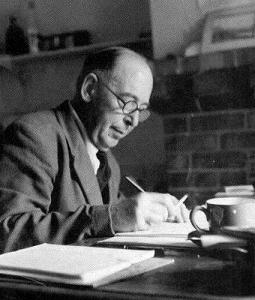 Clive Staples Lewis ("Jack" to his friends and family) (1898-1963) was a mid-twentieth century Irish author of many sorts of books: scholarship regarding medieval literature, lay Christian theology, Science Fiction, and Fantasy.

He was born and raised in Ulster. His mother died when he was young. He was educated in a series of English Boarding Schools, the first of which was run by a Sadist Teacher. He fought in the Great War. He was a member of The Inklings and a friend of Charles Williams and JRR Tolkien, whose influence partially led to his conversion to Christianity (though Lewis being an Anglican and Tolkien a Roman Catholic led to some friction). He published an autobiography of his early life and conversion titled Surprised By Joy. Afterwards, he met Joy Gresham and married her so she could remain in the UK. Then, they fell in love and had an Anglican ceremony after Joy was diagnosed with terminal bone cancer. She died four years later. Lewis himself died the same day as Aldous Huxley and John F. Kennedy; this led to his passing being almost unpublicized.

For a complete list of Lewis' writings, non-fiction and fiction, see the other wiki.