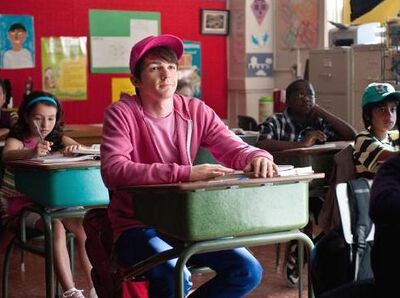 Isn't he a little old to be in the fifth grade?

Sometimes people just fail to develop into social or intellectual maturity. Maybe it's due to a very loving but confining mother or father. Or maybe they just didn't want to leave the nest. Maybe they've been intentionally secluded from learning about the world. Maybe it's the result of brain damage or something more sinister. Perhaps they just never had a life-changing moment involving a shotgun and a beloved pet. Maybe it's just a form of Mars and Venus Gender Contrast. Who can say?

Although the causes might not be clear, the effects are. The Man Child, a term invented by William Faulkner, is usually an adult who possesses a very childlike or childish demeanor. He's emotionally both simple and fragile; he prefers (although does not always need) to have a parent figure to look after him. He usually isn't very worldly and is typically pretty gullible. The Man Child's interests are usually what most people consider to be immature or childish, even in comparison to actual children.

In the vast majority of cases, the character is Always Male. This is (presumably) to contrast the differences between him and "normal men" with the normal responsibilities and wisdom of adulthood. The female version is usually split between The Ingenue, the Genki Girl, or other tropes which highlight an adult woman's child-like attributes rather than her grown-up persona. "Man Child" has many more negative connotations than The Ingenue; the Man Child's immaturity and lack of outward adult behavior is emphasized as being a bad thing versus being an emphasized good thing like The Ingenue's purity and idealism. On the Brain Chain, the Man Child occupies a space between The Cloudcuckoolander and The Ditz, but without necessarily becoming The Fool. He usually does not have The Fool's luck, but he doesn't necessarily play the role of the Butt Monkey either. Although the Man Child is commonly portrayed as being mentally challenged he does not necessarily have to be.

In comedic works, he usually plays the role of The Ditz. In dramatic works, he could be the Jerk with a Heart of Gold due to his simplicity or immaturity, or he could be the sympathetic character we come to love. Sometimes the Man Child embarks on a late-in-the-day Coming of Age Story, which ushers him into true adulthood. Note that usually Sex as Rite-of-Passage works only some of the time for this. In many instances, A Man Child is not a virgin, but only sees sex as a tool of pleasure and does not recognize its emotional significance.

One of the Kids is related, in where their childishness is caused by spending a lot of time around children.

Does not relate to Never Grew Up, because they physically did grow up - but never outgrew being attached to immature or childish things or behavior. Sister Trope (perhaps) to Adults Dressed as Children, although that trope is almost always played for laughs or borders on the grotesque. Compare Keet, One of the Kids, Kiddie Kid. For a villainous version, see Psychopathic Manchild. Not related to Manchild, the British TV series, either.

Examples of Man Child include:

Retrieved from "https://allthetropes.org/w/index.php?title=Man_Child&oldid=1903966"
Categories:
Cookies help us deliver our services. By using our services, you agree to our use of cookies.