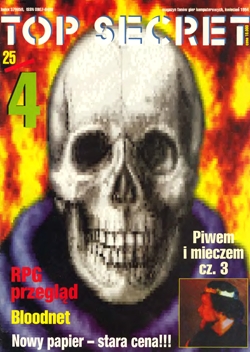 The skull likes you, kids!

A Polish video game magazine which evolved from earlier computer magazine "Bajtek" and existed from 1990 to 1996. Top Secret was the first magazine of its kind in Poland, and quickly became a cult classic still fondly remembered today, mainly because of its editors' wacky sense of humor. It was characterized by huge amounts of inside jokes (sometimes the articles would descend into ranting about the editors' everyday life). The editors had huge freedom which would be unthinkable today.

In the beginning, Top Secret wasn't really a review mag - until 1994, due to the obsolete copyright law, software piracy was basically legal, so pirates were pretty much the sole source of games - and since they sold games at cheap prices, buying a bad game wasn't much of a loss. Thus, an average gamer needed a manual and a gameplay description more than a review (especially since knowledge of English was very scarce). Later on, the mag began actually rating the games, much to some readers' ire who claimed that reviews are for "snobbish magazines".

Occasionally, the magazine contained comics featuring its three Mascot characters; the comics were basically Sprite Comics, with the characters digitally added to the screenshots.

Tropes used in Top Secret (magazine) include:
Retrieved from "https://allthetropes.org/w/index.php?title=Top_Secret_(magazine)&oldid=1702102"
Categories:
Cookies help us deliver our services. By using our services, you agree to our use of cookies.