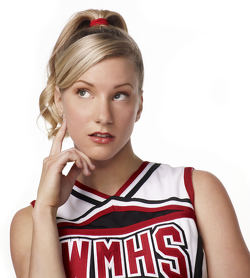 "I'm pretty sure my cat's been reading my diary."

Unlike The Fool, The Ditz is seldom in any real danger, and luck probably couldn't save him if he or she ever were.

A good looking Ditz (of either sex) might be the Brainless Beauty. An independently wealthy Ditz is an Upper Class Twit. An exceptionally clumsy Ditz is a Dojikko. A Ditz that's a Mighty Glacier (Most commonly as The Big Guy or The Brute) is a Dumb Muscle.

A more competent Ditz will often become The Fool. Taken to its extreme, the Ditz can evolve into a Cloudcuckoolander.

One reason you can find The Ditz on so many TV shows is that it gives the audience someone to feel superior to. No matter how stupid you might be, you are smarter than The Ditz.

Can overlap with This Loser Is You, but isn't the same thing.

Retrieved from "https://allthetropes.org/w/index.php?title=The_Ditz&oldid=1881645"
Categories:
Cookies help us deliver our services. By using our services, you agree to our use of cookies.