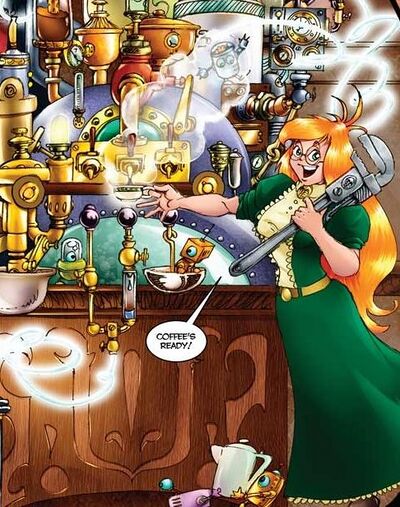 It doesn't matter if she's 13 years old or 13,000, she's the greatest scientific genius in the universe and can prove it by building a 50,000-horsepower battle robot out of tin cans and an old transistor radio. Overnight. Sometimes her creations fail with entertaining explosions, but they always work for at least a little while. In Anime, the Gadgeteer Genius is usually female, and often still in grade school. In Western depictions the gadgeteer is usually male, and can be of any age.

There can be a very fine line between Gadgeteer Genius and Mad Scientist.

A Wrench Wench is a slightly more realistic depiction. Expect her Battle Cry to be "For Science!"

When the Gadgeteer Genius's creations cannot be replicated by lesser minds see The Spark of Genius. When it's the results are impossible according to internal logic and Played for Laughs, it's Impossible Genius.

When the character is known for skill in electronics rather then mechanics he or she is a Techno Wizard. It is possible of course for the same character to be both or for a Gadgeteer and a Techno character to compliment each other on the same team.

Examples of Gadgeteer Genius include:

Retrieved from "https://allthetropes.org/w/index.php?title=Gadgeteer_Genius&oldid=1837627"
Categories:
Cookies help us deliver our services. By using our services, you agree to our use of cookies.