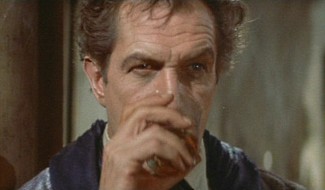 He likes his liquor, and in large amounts. He may realize he has a problem, and get on and Off the Wagon, or he may be a Drunken Master, and this is merely a part of his 'training,' or a result of his -- 'skills.'

Sometimes, this character is merely Drowning His Sorrows, and will bounce back later in the series. Other times, he's been this way from the beginning and has no plans to stop anytime soon. Worried friends may try to help by Nailing Him To The Wagon, though this attempt at forcing him to go Cold Turkey isn't guaranteed to succeed.

In fiction (especially of a comedic nature) Pink Elephants is a common side effect of alcoholism.

Real Life alcoholics are not always lying in the gutter - sometimes they are just people who drink alone, or for the sake of drinking, but never appearing to drink to excess (due to tolerance). Hollywood, however, prefers the 'gutter' form as it is more obvious and pathetic than the man who wanders around the house with a glass in his hand, constantly in a mild stupor.

There is no known cure for alcoholism. Someone who has managed to quit the habit is considered a recovering alcoholic, and if committed to it, remains in whatever therapy he or she used to become sober. That said, there are people who quit without therapy, or who stay sober without therapy, as well as some (very) rare people who don't become sober but do become moderate and responsible drinkers; their mere existence is controversial to the point of Flame Wars over whether they are "in denial" or if it really is possible to drink responsibly once having become addicted. Needless to say, this is not recommended.

The Always Female versions are Hard-Drinking Party Girl and Lady Drunk, but alcoholism is only one of her character traits.

Compare Drunken Master, Hard-Drinking Party Girl, Off the Wagon, Beergasm, Quick Nip, I'll Tell You When I've Had Enough!. Oddly, there are "alcoholics" who can get drunk off of milk. The Teetotaler is his direct opposite.

No real life examples, please; it is quite enough to note that there are plenty of them.

Examples of The Alcoholic include:

Retrieved from "https://allthetropes.org/w/index.php?title=The_Alcoholic&oldid=1965278"
Categories:
Cookies help us deliver our services. By using our services, you agree to our use of cookies.