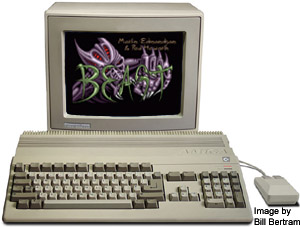 Commodore's 1985 follow-on to the Commodore 64, the Amiga was one of the first true "multimedia PCs", and featured several technologies that were years ahead of their time (including the 16/32-bit central processor). Executive Meddling and Misaimed Marketing kept the system from selling well in the USA, but elsewhere, the Amiga was far more popular and has a cult following to this day. (And when we say "cult", we mean it-Amigans are far more faithful to their platform than Macintosh fans, which is saying something after all it's been through.) At the time, its primary competition was the Atari ST.

The Amiga's heart was a set of extremely powerful custom integrated circuits designed by Jay Miner, who was also responsible for the custom graphics chips in the Atari 2600 and Atari 8 Bit Computers. These chips had names like "Fat Agnes" and included functions such as a "blitter", which allowed fast screen updates, and a "copper" that implemented scanline DMA (which eventually became a common trick on 16-bit consoles). The Amiga also included 4-channel, DMA-driven audio, which led to the development of the first MOD trackers, and the Demoscene that surrounded them. Amiga could also "genlock" to NTSC or PAL video, making it very popular with TV production facilities; NewTek developed the Video Toaster, an early 3D animation system, to work with the Amiga's genlock and overlay capabilities. Many TV shows in the late 1980s and early 1990s used Amigas for computer screens and special effects, notably The Chart Show and Babylon 5. The development of anime fansubs in the late 1980s is also tied to the Amiga and its genlock capabilities, as it represented the first method of overlaying subtitles on video without high-end equipment unaffordable to the average user.

On top of this was AmigaOS, an operating system that had one of the earliest implementations of preemptive multitasking on a consumer PC (though without memory protection) and a relatively friendly GUI called "Workbench". The A1000 even had multiple desktops, which provided prior art that defeated a patent troll.

Commodore eventually failed in 1994, and the Amiga, supported by fans, moved from company to company until settling down in 2000. AmigaOS was ported to the PowerPC and was sold on new hardware called the AmigaOne for a time in the early 2000s. AmigaOne is now planning to sell a new computer, the AmigaOne X1000

The revived Commodore USA is also planning to release modernized versions of the Amiga 1000, 2000, and 3000 (with Intel CPUs, so they can run Microsoft Windows as well as Commodore's own OS).

Other machines compatible with AmigaOS 4

Notes for those who might want to buy hardware

Apart from the CD32, the main game-playing Amigas are the 500 and the 1200. Most A500 games will run on both, though for older or badly made titles, a piece of software called relokick may be required. In the early days, game developers were encouraged to bypass the OS and access the hardware directly, optimizing performance at the expense of forwards compatibility. The 'correct' '80s Amiga is an A500 with the OCS and Workbench 1.2 or 1.3. You will also need some more RAM, preferably the A501 512k "trapdoor" card.

The A501 Slow RAM expansion for the A500, and the A500+, A2000, A3000, and A4000 have a NiCd battery to back up the clock. With age, these batteries leak acid onto the motherboard, ruining it. If you're interested in an Amiga on Ebay, demand to see a picture of the battery before you buy it.

There's also Amiga Forever, which is a collection (sold either as an ISO9660 image or a physical CD) containing system ROM images and OS disk images for all Commodore-era hardware and OS versions (that is, up to 3.1), for use in an emulator (such as WinUAE, E-UAE, or UAE).

Retrieved from "https://allthetropes.org/w/index.php?title=Amiga&oldid=1630723"
Categories:
Cookies help us deliver our services. By using our services, you agree to our use of cookies.