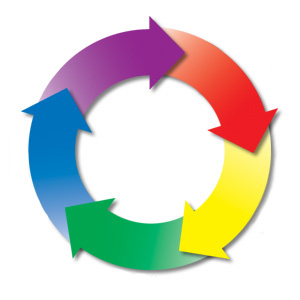 Tropes are not eternal, sprung forth before the dawn of time from the brow of some literary god and like their forebear immortal and unchanging. Tropes are like many other things, living and not, in that they have a distinct life cycle. They are born, live and sometimes die — and they do so in what often seems like an almost organic process. And like organic things, they can surprise us; consider the following stages in the life of a trope to be at best a general guideline. Not every trope mechanically hits every step in this cycle (especially the ones that have yet to fade from use), and sometimes a single example can embody multiple stages all at once.

Every trope began at some point as a clever idea that a Creator came up with in the course of creating a work.

Ur Examples and Trope Makers

Depending on what the creator does with it, this idea may become either an Ur Example or the Trope Maker.

An Ur Example is an early usage that clearly demonstrates the essence of a trope, but may not have all the actual connotations or may be incomplete compared to later uses. It is in effect the primitive ancestor of the future trope, displaying characteristics that make it clear the two are related but clearly not quite there yet.

The Trope Maker is the first unambiguous example of a trope, with all the elements and features that identify it. Though there may have been similar things in the past, the Troper Maker defines the trope as later media consumers will recognize it.

Sometimes the creator who produces the Trope Maker goes above and beyond. Not only does he craft the example that defines the trope for later generations, he dives into and explores all its ramifications. Unburdened by years of other works using, refining and sometimes restricting the trope, he is able to follow all its implications and consequences to their obvious conclusions. As a side effect of his nuanced and in-depth examination of the idea, his work looks like a Deconstruction of the very trope he's creating, before there's a construction there to deconstruct. This is an Unbuilt Trope.

Regardless of how it gets there, the idea eventually reaches its audience. Other creators in that audience like the idea and use it in their works. It may go through several generations of Ur Examples before if finally finds a Trope Maker. Along the way it stops being a unique cool idea specific to a particular creator, and becomes a Trope — a common, even standardized, component for the kind of work in which it appears.

Sooner or later — maybe in its very first appearance, maybe in a later work — there will come an implementation of the trope so striking and archetypal that it defines all other uses from that point on. This is the Trope Codifier. Paradoxically, it may not bear a strong resemblance to the Trope Maker (especially if the Trope Maker was also an Unbuilt Trope), but it effectively becomes the trope for all later generations of both audiences and creators.

To help clarify the differences, here are a set of examples used several other places in the wiki:

For the Detective Story trope:

Once it has been codified, a Trope can be for all practical purposes immortal. Since the most effective tropes directly address universally human experiences and actions, they can easily span cultures, languages, even entire civilizations, moving from audience to audience and appearing in new works for centuries or even millennia. Some tropes grow so intrinsic to storytelling that they become Omnipresent — so ubiquitous, you don't even think of them as tropes until they're pointed out to you, so vital to a particular genre or type of story that they would suffer from its exclusion, or so expected that their lack would be perceived as a failure.

Not every trope settles into a such a steady state, though.

Some tropes continue to grow and change as the world around them does the same, transforming and mutating into new forms of themselves to always reflect the society telling the stories in which they appear.

Others fall into a repeating cycle in which they are subverted and in turn the subversion is itself subverted, endlessly transforming into their opposites and then back into themselves.

In such ways do some tropes survive for decades, centuries or more.

Death of a Trope

Some tropes aren't so lucky. It is the lot in life for all tropes to suffer subversion, parody or any number of other transformations. Many tropes survive such things and come out stronger or more universal for them. Others end up overused or misused until they are rendered Cliché and trite. Sometimes a subversion is so prominent and so effective that no one can take the trope seriously any more. A modern work may deconstruct it so thoroughly that it can't be reconstructed. Or it may simply fall victim to advances in science, technology or society as whole, rendering it obsolete.

Thus begins the twilight of a trope, in which it has become discredited. A Discredited Trope cannot be taken seriously any more, so no one uses it seriously any more. Creators and audiences alike come to think that the trope only belongs in parody, satire, homage or pastiche. If for any reason a Discredited Trope is played straight, the audience will be primed to expect a twist or other clever use, and may end up disappointed when the trope is nothing but itself in all its fading glory.

From here, it's a short trip to the next station on the downward slide:

When a trope has fallen so far that not only is it rarely used straight, parodying or subverting it is a trope in and of itself, then it has become a Dead Horse Trope.

Sometimes, though, the trope just won't die. It survives treatment by creators which would kill any other trope and somehow claws its way back into a state where it manages to exist side-by-side with its subversions and parodies, and still get used straight from time to time. Such a case is an Undead Horse Trope, and some Undead Horse Tropes manage to go all the way through and out the other side to become Omnipresent Tropes.

Those that don't, though, meet the final death, where the trope falls into disuse and creators forget that it even existed. The Forgotten Trope can only found in older works, written during its heyday. Occasionally a modern creator will do the research for a period piece and briefly unearth a forgotten trope, propping the embalmed body up where it can be seen as an exemplar of its time and place. But no one else will bother with it any more. The audience's reaction will at best be puzzlement or perhaps acknowledgement of how quaint and old-fashioned the trope is, and then it will be forgotten once again.

It is possible to resurrect a Forgotten Trope. A sufficiently successful work, Society Marching in a circle, or other radical change may bring a long-dead trope back to relevancy. For example, the Boarding School trope was essentially forgotten in the 1960s, but was revived by J.K Rowling's Harry Potter novels. It's possible, but it is rare.

Retrieved from "https://allthetropes.org/w/index.php?title=Trope_Life_Cycle&oldid=1619835"
Categories:
Cookies help us deliver our services. By using our services, you agree to our use of cookies.