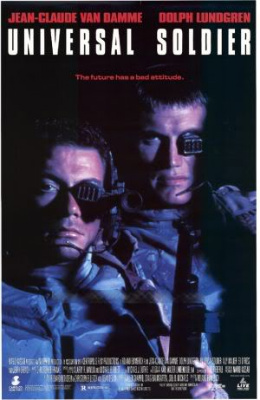 Universal Soldier is a 1992 action film directed by Roland Emmerich, starring Jean-Claude Van Damme and Dolph Lundgren. It kick-started a series that now encompasses five films(but only two are canon)

Universal Soldier begins in 1969, during The Vietnam War. Private Luc Devreaux (Van Damme) having finished his tour, is leaving when he finds out that his Sergeant, Andrew Scott (Lundgren), has killed his entire platoon and taken hostages. Devreaux confronts the Sergeant and attempts to talk him down, only to fail, resulting in the deaths of the hostages. Devreaux attacks the Sergeant and the two men kill each other. Their deaths are covered up, and they are entered into the "UniSol" program. Twenty-three years later, Devreaux and Scott are "universal soldiers"–cybernetic Super Soldiers. After a successful mission and an encounter with a reporter (Ally Walker as Veronica Roberts), Devreaux begins to have flashbacks to Vietnam and remembers fragments of his past life...but so does Scott. The film did not garner critical praise, but today is recognized as a cult classic.

In 1998, the film was followed by two direct-to-video sequels: Universal Soldier II: Brothers In Arms and Universal Soldier III: Unfinished Business. Brothers In Arms has the UniSol program being used by mercenaries to smuggle diamonds, while Unfinished Business has Devreaux helping Veronica Roberts to clear her name, while Devreaux's brother is being cloned and turned into a new UniSol. These sequels featured none of the original cast or crew and are largely considered to be worse than the first film.

Brothers In Arms and Unfinished Business were retconned in 1999 with the theatrical release of Universal Soldier: The Return. The Return features...the return of Jean-Claude Van Damme in the lead role. This sequel has Luc Devreaux working to create a newer, more advanced group of UniSols, all connected to an Artifical Intelligence dubbed "SETH". When the program is threatened with budget cuts, SETH attacks those it deems a threat to it and the program, forcing Devreaux to fight and shut it down.

Yet another Retcon came in the form of Universal Soldier: Regeneration, released direct-to-DVD in 2010. This film brings back Dolph Lundgren as Andrew Scott and reunites him with Van Damme as Devreaux. Devreaux, in therapy after the events of the first film, is called on to defuse a hostage situation at the Chernobyl Nuclear Power Plant, where a more advanced UniSol is under control of a group of Russian terrorists. Regeneration received decent reviews, and plans to make a fourth film (in 3D, no less!) are underway.

Tropes used in Universal Soldier include:
Retrieved from "https://allthetropes.org/w/index.php?title=Universal_Soldier&oldid=1482282"
Categories: