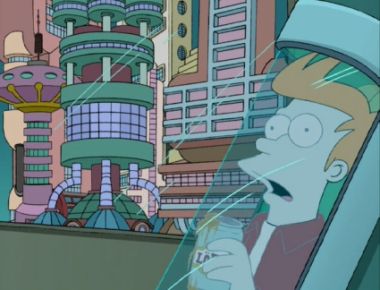 Cryonics, as Applied Phlebotinum, is a mechanism by which a person can be frozen, halting the aging process and giving them a non-stop ticket on the Suspended Animation Express to the future. Once they get to the future, they can be thawed out and reanimated.

The result is that we get a Fish Out of Temporal Water setup wherein a human—usually the audience's approximate contemporary—is thrust into The Future and has to deal. This can get especially thorny if their home or civilization has since been destroyed and forgotten, or changed beyond recognition, making them a Living Relic.

It also works with the past, as just about every cartoon and even some live-action shows have played with the idea of turning a caveman or a viking loose in modern society.

Invariably, cryonics, the study of preserving humans or other organisms at low temperature, is confused with cryogenics, the creation of very low temperatures and the study of how materials work in those conditions. Honestly, just because a word has '-gen-' in it doesn't mean it has anything to do with biology....

Cryonics Failure, where something goes horribly wrong that kills some or all sleepers, is a potential danger.

The Human Popsicle usually takes one of three forms:

The ability to freeze and later revive some simple organisms—including human embryos—currently exists and has for some time (one motivation of cryonics is that some animals have an innate ability to survive a similar naturally induced state), but there are many technical problems with applying this to a fully grown human.[1] And as mentioned above, people cannot legally be cryonically suspended until they are pronounced clinically dead (or aren't legally alive yet, like the aforementioned embryos), which could cause problems if brain damage occurs due to anoxia. For the sake of television, we just assume that whoever does the thawing has the technology to overcome this. Sometimes this problem is Handwaved by claiming that what's actually going on is some sort of localized time stop (Time Stands Still, except inside out), although all other aspects of the trope remain the same.

If you happen upon someone else who has been frozen, read all the manuals before thawing them out: nine times out of ten, they will turn out to be psychopathic murderers (just ask the crew of Red Dwarf).

This is not to be confused with Ajax's plans for you with a bat.

Examples of Human Popsicle include:

Retrieved from "https://allthetropes.org/w/index.php?title=Human_Popsicle&oldid=1927324"
Categories:
Cookies help us deliver our services. By using our services, you agree to our use of cookies.