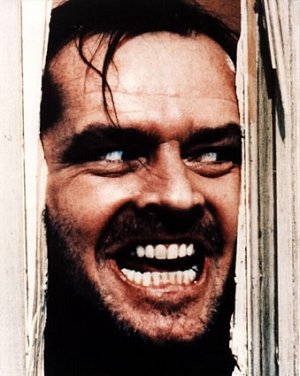 An "ax crazy" character is someone who is psychologically unstable and presents a clear danger to others. Ax crazies are capable of extreme violence, whether carried out with a Slasher Smile, a Creepy Monotone, or out and out murderous rage, and with no way of knowing just what will set them off, this makes them extremely frightening to deal with. Also be prepared to expect them to burst out into insane laughter while undergoing the extreme violence. This mainly differentiates them from other eccentric characters who may themselves be obsessive, weird or seemingly crazy, but use this condition hand in hand with doing good, or at least not being in the way. However, some formerly established heroes can go through an episode of ax-craziness and still retain their heroic mantle.

Despite the title, ax crazies aren't limited to wielding axes—most of them are Knife Nuts who favor straight razors or other nasty implements of gory death, with the truly crazy among them liking it Chainsaw Good (and the best of them, chainsaw axes). A good number of other ax crazies are also Trigger Happy, preferring either Hand Cannons that blow really big holes in people, or weapons that allow them to kill lots of people with reckless abandon, such as any automatic weapon. And for the truly psychopathic among psychopaths for whom the above just won't do, a heaping helping of high explosives or a good-sized flamethrower will do quite nicely. Sometimes, they don't even need weapons and just use magic spells if they have them.

It is rare for a truly Ax Crazy character to be a protagonist. Common as the antagonists in Superhero and Crime and Punishment Series, often serving as a Psycho for Hire. If they are a protagonist, they will most certainly be an Anti-Hero or Villain Protagonist. The difference between them and Blood Knight is this trope is all about killing while the Blood Knight is only interested in fighting. There is, of course, plenty of room for overlap. See also Insane Equals Violent, Mad Bomber, Cute and Psycho, Hair-Trigger Temper, and Blood Knight. Many characters with a Hair-Trigger Temper are also Ax Crazy, as is the Yandere when she goes off the deep end. Also see Mama Bear, Papa Wolf, and Violently Protective Girlfriend, who are capable of temporary Axe Crazy grade fury when their kids or mate are under threat, though those characters are almost ALWAYS played sympathetically. The all but canonical Character Alignment for an Ax Crazy character is Chaotic Evil (or, sometimes, Chaotic Neutral). Sometimes The Unfettered, depending on whether they feel freed or enslaved by their bloodlust.

Examples of Ax Crazy include:

The extent to which he was actually Ax Crazy is open to debate, and may have been exaggerated by his enemies and accounts composed long after his death.

Retrieved from "https://allthetropes.org/w/index.php?title=Ax_Crazy&oldid=1937804"
Categories:
Cookies help us deliver our services. By using our services, you agree to our use of cookies.