Everything About Fiction You Never Wanted to Know.
(Redirected from Useful Notes/United Kingdom)
Jump to navigation Jump to search 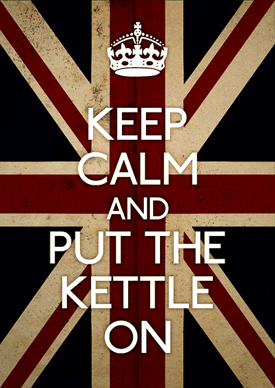 No matter what the problem, tea is the answer.

Useful information on British life and the United Kingdom for those who are not British.

The United Kingdom of Great Britain and Northern Ireland is a state which sits on a collection of islands in (or "near") the North-West of Europe, most particularly Great Britain and a northern part of the island of Ireland, as well as smaller islands like Orkney and Shetland. "Great Britain" is not the name of the country, at least not since 1801.

Britain is made up of four "home nations": England, Scotland, Wales and Northern Ireland. Wales was annexed by England in the middle ages (and the title of Wales' old ruler - Prince of Wales (Tywysog Cymru) - has been passed to the reigning English monarch's eldest son ever since) but Scotland's entry into this Union was via vote of the Scottish Parliament in the early 18th century which means, theoretically, Scotland entered as an equal. Because England and Scotland merged to form the Kingdom of Great Britain, this means that talking about the "Kingdom of England" (or of Scotland) after 1707 is incorrect as those entities had legally ceased to exist. (Which makes the common foreign—and frequently domestic—reference to Her Majesty as 'the Queen of England' a mistake). The title "United Kingdom" only came about when another Act of Union combined the Kingdom of Great Britain with the Kingdom of Ireland, though paragraph III of the 1707 Act of Union states "THAT the United Kingdom of Great Britain be Represented by one and the same Parliament..." and the description "United Kingdom" was in common parlance in the 18th century.

The King of England was also Lord of Ireland from 1171, and King of Ireland from 1541; Ireland joined the UK in 1801. Most of Ireland left again in 1921 to form the Irish Free State, which later became the Republic Of Ireland. Since 1999, Scotland and Wales have been partially self-governing through a new Scottish Parliament and the Welsh Assembly respectively, though these bodies only have powers to deal with certain areas of government - education policy, for example. Scotland & Wales still elect MPs to the main London Parliament too, which retains control over national issues like defense. Northern Ireland is a portion of Ireland that remained part of the United Kingdom after the rest of Ireland decided to become independent (and, later, a republic) in the 20th century.

Variously described by names such as the United Kingdom of Great Britain and Northern Ireland, the United Kingdom, the British Isles, Great Britain, Britain; many in fact refer to subtly different entities and these themselves may contain areas with different rules (the Channel Islands, Man, etc). It is perfectly easy to run across a construction like, "The Isle of Man is part of the British Isles but not governed by the British Prime Minister; though it is not part of the United Kingdom it is subject to the Queen of England" - all of which is essentially correct, but the hideous confusion all these overlapping and vaguely similar-sounding terms create is so great it is nearly impossible to explain the situation to someone unfamiliar with it. Especially not verbally, when this necessitates using phrases like "a man from Man has a British passport but is not technically British and certainly not from Great Britain" or "the Republic of Ireland in the island of Ireland is properly called Ireland"... Fortunately, the helpful magic of TV Tropes now lets you straighten out all this mess by looking at Britain Versus the UK to clear it all up.

The name 'Britain' has been traced back through the Latin 'Brittannia' back to 'Prydain' and the tribal 'Pretani', and most probably means 'the tattooed ones'.[1]

Modern 'Britain' didn't exist as a political entity until the early 17th century when James VI of Scotland became dual monarch of Scotland and England and, although both countries were independent of one another, the idea of 'Britain' came from this dual monarchy. The British political system (largely inherited from that of England following the two countries' most recent union in 1707) is the oldest in the world but has undergone some major upheavals in its time, including the Magna Carta of the middle ages (which established the rights of the aristocracy in relation to the King), a Civil War in the mid-17th century which overthrew the monarchy and established a republic (although this only lasted eleven years) and a coup d'etat in 1688 known as the 'Glorious Revolution' which overthrew another King and reined in monarchical power meaning that the monarch was forced to rule in partnership with Parliament. Although 1688 is seen as the "basis" for the modern British constitutional setup the years since then have seen the monarchy lose its remaining practical powers and become entirely symbolic whilst Parliament has become the de facto ruler of the country.

Democracy in Britain proceeded through a series of parliamentary reforms, where power was gradually ceded from the nobility, to the common citizenry. Electoral suffrage widened slightly with the Great Reform Act of 1832 which was the first to enlarge the electorate, but still left it very narrow, based on income and with different rules in different places, allowing a fair bit of corruption. External events - specifically the American and French revolutions are generally held to have had a large influence on the decision to widen the vote. After this the electorate expanded relatively rapidly during the 19th Century so that for the first time over half of men could vote by 1884. In 1918 property restrictions were removed for all men, who could now vote at the age of 21, and some women were given the vote for the first time (although not on equal terms with men, suffering property and age restrictions). Historians will gladly discuss what caused the government to give women the vote, but the two simplest reasons are the campaigns of the militant suffragettes, and the work that women undertook during the First World War. Some people still held two votes - TOW says that 7% of the electorate held two votes. In 1928 women were allowed to vote at 21 just like men could, and in 1969 the voting age was reduced to 18, where it still stands today.

Once ruled the largest empire in world history, but gave independence to the other countries after World War Two. A permanent member of the UN Security Council, and with its own nuclear weapons and one of the few remaining blue-water navies, Britain's status as a credible military power on its own is well cemented, mostly because of the war in the Falkland Islands: waging war with an advanced military force sited next door to the contested scrap of land in open conflict 8000 miles away and then winning is no mean feat. Once an industrial powerhouse, Britain now has a mainly service-based economy but is still the world's sixth largest manufacturer.

The British have a tendency to be Wicked Cultured when it comes to their own language, frequently throwing Latin, French, Spanish, German and Italian phrases into everyday conversation. Tellingly London has a population where over 250 languages are spoken. This is likely due to the fact that throughout history, there has been a steady influx of external cultural influences to the island nation, from Romans to Scandinavian to French, thus the need to evolve their language into a highly complicated pidgin to facilitate communication and trade.

Britain creates sports and watches the rest of the world master them, with the exception of Self-Deprecation, which nobody else seems to have the hang of.[2] As the only English-speaking country for most of history, a huge proportion of classic English-language literature originates from the British Isles.

The UK produces a large number of English-language films and TV programmes of international fame, from places like Pinewood Studios and The BBC.

Since Britain is the cradle of the English language, British English has been known as... oh sod it. I never wanted to do this. Ranting in a page about the traits of a country in Europe. Discussing linguistics I have little base to know. I always wanted to be... A LUMBERJACK!.

Areas of the United Kingdom of Great Britain and Northern Ireland

The "Union Flag" Flag of The United Kingdom

Commonly referred to as the 'Union Jack', however this is only correct if it is flown at sea.

Retrieved from "https://allthetropes.org/w/index.php?title=Britain&oldid=1534856"
Categories:
Cookies help us deliver our services. By using our services, you agree to our use of cookies.