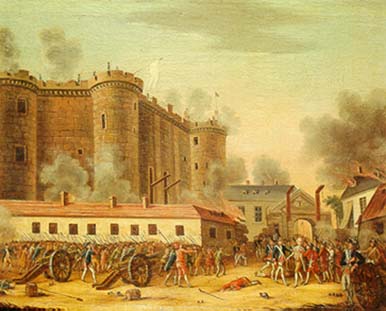 "Too soon to tell."
—Zhou Enlai, in 1972, on the historical impact of the French Revolution[1]

Era in French History when Marie Antoinette tried giving her subjects a little dietary advice, who responded by storming Versailles and putting her and her brave husband Louis XVI to death by the guillotine. Their son, the Dauphin, makes it out of France alive, though, thanks to the tireless efforts of that "demmed elusive Pimpernel". Everyone in this time period wore pastel-colored satin, big fancy wigs, fake beauty marks, and snorted snuff like it was cocaine. Unless they were poor, in which case they wore trousers with tricolor badges and sung "String the aristocrats from the lamp posts!" whilst waving their pitchforks and gnashing their rotting teeth. Don't forget about taking down l'ancien régime.

Then Napoleon took over, and marched across Europe, stopped only by Richard Sharpe or the Russian winter, depending on your nationality.

The more cynical version of the French Revolution wasn't nearly that much fun. Start with a nation bankrupted by the construction of palaces and drained by wars (The American Revolution in particular), add in a new and very young king and queen who don't have a clue how to run the country, throw in a famine that makes bread too expensive for the average person to buy, and don't forget to add a heaping helping of bitter, crude, filthy misogynist ranting over the "Austrian Bitch" at Versailles and an arbitary non-income-based tax system that meant many people's tax demand was greater than their entire income.

Simmer for a few years, then let the poor boil over, form mobs called the sans culotte (lit without knee breaches, as in they wore pants), and kill anyone they can catch, including the cream of the country's scientists, musicians, judges, educators, and artists. Burn to the ground any department that raises any objections. Spread lots of stories about Marie's sexual escapades and supposed indifference to the poor and Louis's supposed cruelty to justify your actions, and finish by executing everyone who instigated the revolution. Don't bother to actually feed the poor, though.

The revolution started with many liberal and progressive ideas. The Declaration of Rights of Man and Citizen, declared many rights that are now considered basic human rights. In a radical idea at the time, divorce was legalized. Guilds were abolished, allowing more people to enter professions that had been protected by stringent requirements meant to protect its members from competition. Church lands were seized, and clergy were forced to swear an oath to the new constitution. At first the King seemed to be embracing the idea of a constitutional monarchy, even swearing an oath to uphold the constitution. However, in a scathing letter left behind when he escaped Paris, he made it clear that this was not the case. On the 10th of August 1792, the sans culottes and the National Guard attacked the Tuileries Palace and slaughtered the Swiss Guard guarding the royal family. The constitutional monarchy was no more, with the king placed under arrest. From there all order was lost, with the government declaring itself revolutionary and declaring terror to be its official policy.

An example of the variety of viewpoints is: in England "Jacobin" means "Jacobin", in America "Jacobin" means "fanatic", in Austria "Jacobin" means people like Alexander I of Russia, and in France "Jacobin" means "anti-federalists". To this day, the European political spectrum is largely oriented by one's opinions on the French Revolution: the terms "left" and "right" themselves originate in where the delegates sat in the national assembly; other cool terms like Montagnard (Mountaineer) have not survived. Moreover, liberalism consists in agreeing with it only so far as it went before the Reign of Terror; socialism consists in extending and "perfecting" it; conservatism consists in disliking it but working within the structures it creates; and reaction consists in trying to do away with it altogether. These notions have slipped a lot with time, the modern meaning of these terms being quite different. Red October and World War II changed these positions (for instance, the latter added fascism, a combination of socialism's revolutionary spirit with a conservative/reactionary opposition to its ideals), but did little to alter the overall orientation.

Ironically, at the time the French and American revolutions were seen as ideological twins (subject peoples inspired by radical liberal ideas overthrowing aristocracies... though that might be a stretch in America's case since it was largely lead by the middle classes and contained a fair number of American aristocracy) and supporters of one were usually supporters of the other (Tom Paine, the Anglo-US radical, considered a traitor by the British for his support of the American revolution, was an equally-fierce supporter of the revolution in France). Modern "interpretations" of the events of the period usually say much more about contemporary politics and bickering than they do about the late 18th century.

Lastly, we can't discuss La Revolution without talking about the Republican Calendar. Wanting to eliminate Christian influence, the French reset their calendars based on the new French Republic. 1792 (the year the Republic was founded) was now Year I (years were written in Roman numerals), and September 22 (the official beginning of the Republic) marked the beginning of the year. But it didn't end there. Years were divided into 12 months...but each month had 30 days (months were renamed after the common weather conditions of Paris), and each week had 10 days. A mostly decimal-based calendar looked good and orderly on paper, but in practice was somewhat more complicated. For instance, there would first be five-year intervals between leap years, followed by four. Even so, the French and eventually Napoleon persevered at it before giving up in 1805. The revolutionaries even tried to institute decimal hours, minutes, and seconds, but this proved even less popular. However, longer lasting where a bunch of units introduced by the National Convention in Year 3 (1795) like the meter for lengths, the liter for volumes of liquid, the gram for mass, along with multiples of these units by factors of 2 and 10 like the kilogram (1000 grams), double decaliter (20 liters), or the centimeter (0.01 meters). Other long lasting changes include the departments, whos borders have changed little since 1789 and the tricolor flag.

See also French Political System, for all the bizarre things that have happened in France since then.

The French Revolution provides examples of the following tropes:

1 - On 20 June, 1789, you attacked the sovereignty of the people by suspending the assemblies of its representatives and by driving them by violence from the place of their sessions. Proof thereof exists in the procès-verbal drafted at the Tennis Court of Versailles by the members of the Constituent Assembly.
2 - On 23 June you wished to dictate the laws to the nation; you surrounded its representatives with troops; you presented them with two royal declarations, subversive of every liberty, and you ordered them to separate. Your declarations and the minutes of the Assembly established these outrages undeniably.
...
32 - On 10 August you reviewed the Swiss Guards at five o’clock in the morning; and the Swiss Guards fired first on the citizens.
33 - You caused the blood of Frenchmen to flow.

The French Revolution is featured in or referenced by the following works: