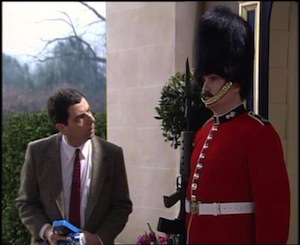 This is a British Media Tropes about the Guards Division as it appears in fiction. If you're looking to learn more about the real thing, The Other Wiki has more relevant information.

Whenever our ensemble cast goes on an adventure touring Britain (and by "Britain" we mean, of course, "London"), there's always going to come a point where one or all of our characters wind up at Buckingham Palace where he/she/they will, no doubt, encounter these oddly-dressed fellows in giant, furry hats and red shirts who appear to be extremely disciplined and dedicated to following a strict code that seems to entail only two things:

When played straight, one should always expect to see tourist characters trying to provoke an emotional response out of them (usually either laughter or surprise to a sudden "Jump Scare"), taking advantage of the guard's duty to remain still (often becoming the victim of a Motionless Makeover), or observing the surreal levels to which they adhere to their marching schedules and routines--especially the Changing of the Guard—with little to no consequences to the characters observing them.

However, this becomes more and more of a Discredited Trope as time goes by and can now effectively be considered a Dead Horse Trope. In Real Life, the Guards are not posted as a ceremonial tradition to amuse tourists but, in fact, actually guard Her Majesty, The Queen.

Silly hats and clothes aside, these guys take their jobs very seriously; they're typically carrying 5.56mm caliber assault rifles that are ready armed, loaded, and usually fixed with bayonets, and they don't take kindly to mocking tourists. And the reason there are five whole Guards regiments (and two of guards cavalry)? They only spend a small portion of their time on ceremonial duties. Odds are that most of the men on duty at the moment have recently been in an active warzone.

As The Other Wiki will tell you, guards at Buckingham Palace haven't even been posted outside the Palace's gate since the late 1950's because of the annoying tourists (likely trying to imitate a scene from I Love Lucy, below) as a measure to prevent any bad incidents for the good of the guards and the safety of the tourists. However, the guards posted at St. James's Palace are still stationed in areas open to the public.

Online videos taken by tourists frequently display people's attempts at getting a rise out of one of these guys; sometimes they fight back!

If you're really in a mood to play games with these guys, don't expect to come out unscathed. Reality Is Unrealistic; you have been warned.

Examples of British Royal Guards include:

Retrieved from "https://allthetropes.org/w/index.php?title=British_Royal_Guards&oldid=1564069"
Categories:
Cookies help us deliver our services. By using our services, you agree to our use of cookies.