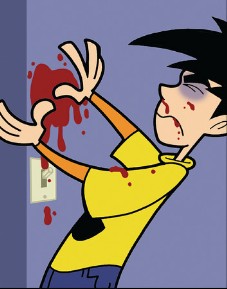 Head On! Apply directly to the forehead!

"This is not a novel to be tossed aside lightly.
It should be thrown with great force."

The writer asked for too much Willing Suspension of Disbelief. A character is carrying an Idiot Ball, or has suddenly become Too Dumb to Live. The series pulled out Green Rocks once too often, shilled the Creator's Pet one too many times, used a few too many Hand Waves, or unleashed a Retcon that made everyone's eyes roll out of their head. The Fourth Wall has been unintentionally and brutally broken, throwing the viewer's mind into utter chaos. Sometimes it is a force too powerful to be contained, even by willing suspension of disbelief or the MST3K Mantra. However it happened, the audience has been dealt a Wall Banger.

The origin of the term is attributed to Samuel Goldwyn, who described a script as having made a "Hell of a bang, when I threw it against the wall."

Compare and contrast with Narm. Head Desk is the (objective) trope for when a character slams his head against a wall. Awesome Moments are the polar opposite of this. Compare with Dethroning Moment of Suck, for moments that are so awful that the works in question are never seen the same way ever again.

Examples within the following pages will be highly subjective. Read at your own risk, and if somebody rants about a show you like, please refrain from making Justifying Edits. If their facts are wrong, just delete them. Also, please try to avoid mentioning pilot episodes, as they are the beginning points and most of the time viewers will end up thinking they can be improved later in the series. Various examples may deal with endings or key moments of the shows, so expect spoilers.

No real life examples, please; this is a YMMV Trope, and we don't need the Edit Wars.

Examples of Wall Banger are listed on these subpages: