You Have Failed Me... 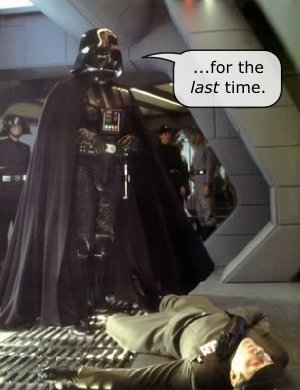 Commonly in a Sic'em scene, the Big Bad - usually a Diabolical Mastermind - kills one of his henchmen who has failed to capture and/or kill The Hero, as motivation to all of his other (surviving) underlings not to repeat their failure. Presumably, the other underlings immediately all fall into line instead of (say) quietly updating their resumes and trying to find a less psychopathic overlord to work for. This is related to Karmic Death.

Some bad guys will use the Blofeld Ploy to pull off the underling murder. Others will drop the offending underling through a Trap Door in The War Room into a Shark Pool or other Death Trap.

The Big Bad may eventually realize there's something special about the hero and stop summarily executing minions for their failures as he gains a healthy admiration for his skills, but don't bet on it, evil organizations more often than not will stick to an explicit policy of "You fail, you die." Few stories address the question of what happens when this policy is taken to its logical conclusion, oddly enough. (Realistically, such a policy causes its practitioners to kill off many of their own skilled leaders, while leaving the survivors demoralized, afraid to take initiative, and inclined to either desert or kill the leader before he kills them. See the unfortunate results described in the Hitler and Stalin examples under "Real Life".)

Another variant on this is instead of the Big Bad doing this, a high-ranking, oftentimes very loyal, and particularly ruthless official working for the Big Bad, possibly The Dragon, does it instead—perhaps without the boss' approval.

See also: Bad Boss, Shoot the Messenger, You Have Outlived Your Usefulness, and Villainous Demotivator. Contrast Even Evil Has Loved Ones, I Will Punish Your Friend for Your Failure.

Examples of You Have Failed Me... are listed on these subpages:

Retrieved from "https://allthetropes.org/w/index.php?title=You_Have_Failed_Me...&oldid=1537124"
Categories:
Cookies help us deliver our services. By using our services, you agree to our use of cookies.