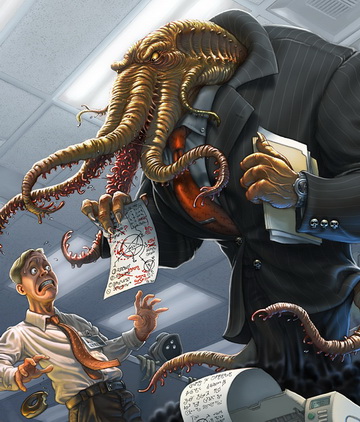 A Diabolical Mastermind or other villain establishes just how bad they are by callously mistreating their own henchmen, sometimes outright maiming or killing them - not just for failures that weren't their fault, but simply because somebody blew their nose too noisily; or to remind them who's the biggest, baddest mother there; or because he was in a bad mood; or in many cases, absolutely no reason whatsoever.

Why anyone goes on working for them is unknown. Their behavior sometimes breeds Starscreams or annoys/scares off their mooks into joining the winning (or at least less dangerous) side, but sometimes it has no effect... and sometimes you're left wondering why anyone would work for them in the first place. They may have simply Signed Up for the Dental.

In some cases it's not the Big Bad, but a more vague force of evil that slaughters its own. For those cases see Artifact of Death.

Not related to That One Boss. Contrast with Benevolent Boss. Never ever ever try With Due Respect on a Bad Boss.

Examples of Bad Boss include:

-04-21 quite the evil boss] [dead link] if he's given the position. Of course, as Alice found out, simply accepting such a position requires relinquishing your soul.

Retrieved from "https://allthetropes.org/w/index.php?title=Bad_Boss&oldid=1958398"
Categories:
Cookies help us deliver our services. By using our services, you agree to our use of cookies.