Atticus Finch: There's been some high talk around town to the effect that I shouldn't do much about defending this man.
Scout: If you shouldn't be defending him, then why are you doing it?
Atticus Finch: For a number of reasons. The main one is that if I didn't, I couldn't hold my head up in town. I couldn't even tell you or Jem not to do somethin' again. You're gonna hear some ugly talk about this in school. But I want you to promise me one thing... that you won't get into fights over it, no matter what they say to you. 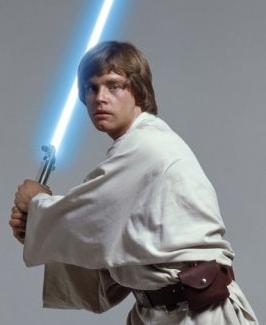 The Leader. The Captain. The Protagonist (well, usually). That shining star that holds the whole mess together. In a team lineup they will be front and center.

This guy is a hero, pure and simple. He's almost always right, is a friend to all his bandmates, and morally superior. He has a well-rounded skill set. He's not as strong as The Big Guy, or as smart as The Smart Guy, or as sensitive and socially adept as The Chick, but he's close. He can personally accomplish a variety of goals, but his real superpower is getting the whole diverse set of personalities under his command to focus and pull together. He'll always know who to ask for help, and when—and usually how.

Other powers and skills common to the hero include:

Almost invariably, The Chick is in love with him (unless she's The Hero or his sister and sometimes even then), as are any other members who happen to be women or Gay Option or Bi the Way.

If the Hero has too much of the "positive" qualities listed above, he may degenerate into a Marty Stu. If he's too generic, then he's a Standardized Leader. They are sometimes the Only Sane Man trying to keep the team together—smoothing over disputes with an Ordered Apology if need be. If this is the case fans might consider him to be dull compared to more entertaining members of the team, in which case he suffers from Designated Protagonist Syndrome.

The Hero and The Lancer usually have a special chemistry within the Band, either a Ryu and Ken relationship or Red Oni, Blue Oni. They are often rivals with a strong mutual respect for each other, and are sometimes even Heterosexual Life Partners.

The primary romantic plot in the band will be between The Hero and The Chick, with The Lancer rounding out a triangle. For a female Lancer who doesn't double as The Chick, they will likely be an Unlucky Childhood Friend. (Bonus points if The Lancer is bisexual and is interested in both of them!) The Hero might also be a Chaste Hero or a Celibate Hero as an additional complication to romantic subplots.

Usually, this role will not be filled by a woman unless all the other roles are already women (as is often the case in Anime). If so, there might not be a Chick in the group (although there might be The One Guy or the Non-Action Guy), and the prize for "most feminine" will go to The Hero or The Smart Guy.

The Hero does not HAVE to be The Leader, or the most intelligent. This is usually justified by him being the youngest, most inexperienced, and/or newest member of the team. Thus, his more senior teammates may quite reasonably see him as the Tagalong Kid or the Sixth Ranger, even if he's clearly the central protagonist to the audience. He may even be something of The Chick if he's a Mouthy Kid or The Fool. Don't worry - in time, he will reveal his great potential, eventually swaying friend and foe alike to his cause. Even if he needs significant growing up to reach that point.

Note that The Hero will very often have Vetinari Job Security, particularly if leading (or just being the glue that keeps together) a Ragtag Bunch of Misfits. The Lancer will not believe this until it's proven to him/her, of course, but it's nearly always true nevertheless.

And if there's a character Cooler than the Hero, that character is generally Too Cool to Live.

See also The Ace, The Kirk, The Messiah, The Chosen One, and Hero Protagonist. A Superhero is, by the catch-all definition, a hero (often with superpowers) who dedicates their very life to... well, being a hero.

Note: It is important to remember that while the hero is usually also The Protagonist, they are not necessarily one and the same. Whereas the hero is defined by the character traits described above, The Protagonist is defined by their central role in the story. In Star Wars, for instance, Luke Skywalker is an almost ridiculously archetypical example of The Hero and is more or less the Main Character of the original trilogy, but the Prequel trilogy establishes the more antiheroic Anakin Skywalker as The Protagonist of the film series as a whole, even though he is a villain for more than half of the saga. See Supporting Protagonist for instances in which this is the case.

Examples of The Hero include:

Retrieved from "https://allthetropes.org/w/index.php?title=The_Hero&oldid=1878044"
Categories:
Cookies help us deliver our services. By using our services, you agree to our use of cookies.