You Have Outlived Your Usefulness 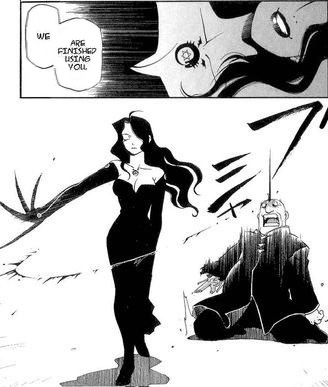 To show or remind the viewer how nasty the Big Bad or his Evil Minions are, a common trope is their habit of callously disposing of anyone who is no longer useful to their plans, whether it be an associate of an evil organization who has just concluded their useful function in the organization, or an outsider who the villain has coerced or tricked into carrying out part of their plan and is killed when the outsider has done what the villain has ordered.

It is often punctuated with words to the effect of "You have outlived your usefulness" or "you have served your purpose" before the murder.

This is often done as an excuse not to pay them, or to punish the minion for asking for a raise, especially when done right before the critical mission. A particularly callous villain may also do this to an underling who has been defeated, combining this trope with You Have Failed Me.... May also happen to a villain who thought he was the Big Bad, but forgot that Evil Is Not a Toy. More realistically, the victim in question may be privy to information that the villain doesn't want to get out—as the Pirates say: "Dead men tell no tales." Finally, sociopathic villains are notorious for viewing people as little more than tools to be used and then discarded once they've served their purpose, with this trope being perhaps the ultimate form of this callous attitude.

If the Big Bad is also particularly annoyed by how his Evil Minions have functioned in their role, he may use The Blofeld Ploy.

A variant of this trope is common when a villain who has enlisted the help of the oblivious heroes reveals his true villainy, the comment usually following his gloating of how they played right into his hands. Warning to any Genre Savvy villains out there: This version of the trope has a noticeably lower success rate, and trying it on The Hero is tantamount to suicide.

Compare You Have Failed Me... (when the executed underlings are killed because they didn't succeed), Rewarded as a Traitor Deserves, and The Uriah Gambit. Shoot the Builder is a subtrope. Contrast Can't Kill You - Still Need You. See also Villainous Demotivator and Even Mooks Have Loved Ones.

Examples of You Have Outlived Your Usefulness include:

Retrieved from "https://allthetropes.org/w/index.php?title=You_Have_Outlived_Your_Usefulness&oldid=1859150"
Categories:
Cookies help us deliver our services. By using our services, you agree to our use of cookies.