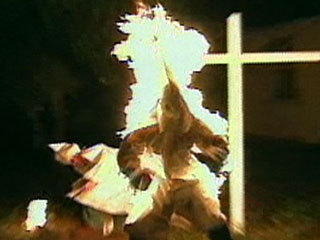 "You know...he's accident-prone. This is not the first time this has happened."

No matter how evil the villain is... the good guys can't just kill them. They're supposed to be pure and noble (or innocent). Having blood on their hands means they'd have to change genres and become Anti Heroes.

Having the villains just be arrested isn't as satisfying, either. Besides, they have the tendency to escape. Often, the villains are just too evil for such mundane measures. Plus, some part of the viewer wants Justice to be administered, but we don't trust human hands to administer it.

... so, the writers arrange for the villain to die in a manner that is completely their own fault. Or at least, not the hero's. Usually right in the act of attempting to kill the hero, for that extra karmic zing.

Note that this only applies if the villain is clearly human, or the show universe's nearest equivalent. If they change into some kind of monster, they are no longer protected by this trope.

More common in Western markets, as a result of heavy censorship and the general reluctance among writers to feature their character (usually in a show with a younger Demographic) doing such acts as killing, especially if they're underage. Occasionally known by the older demographic as "getting one's comeuppance."

Karmic Death is an example of Death by Irony. Disney Villain Death and The Dog Bites Back are subtropes.

Compare Hoist by His Own Petard. See also Cruel Mercy. The Dog Shot First usually involves this. The Killer Becomes the Killed is a Crime and Punishment Series variant.

Examples of Karmic Death include:

Retrieved from "https://allthetropes.org/w/index.php?title=Karmic_Death&oldid=1894972"
Categories:
Cookies help us deliver our services. By using our services, you agree to our use of cookies.