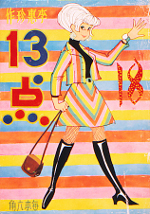 A "13-dot" (十三點) means roughly The Ditz in old Shanghai and Canton slang -- which is an apt description to the protagonist of this Hong Kong Manhua published between 1966 and the mid 70s. An always cheerful, fashion-crazy girl from an impossibly rich family, 13-dots and her friends go on wacky adventures in each issue. Hilarity Ensues, but everything turns out all right in the end.

A total of 178 issues have been published. During her heydays in the late 60s and early 70s, 13-Dot was extremely popular among working-class women in Hong Kong, who lived vicariously the life of the rich and glamorous through their favorite heroine. Factory girls would style their home-made clothes after her. Incidentally, this may be why artist Lee Wei-Chun's attempt to re-launch the comics in the 2000s was a failure: Hong Kong was far wealthier by then; fashion was easy to come by; while girl Manga have all but captured the imagination of today's youngsters.

Tropes used in 13-Dot include: