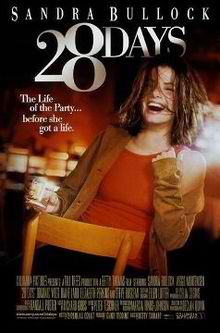 The life of the party... before she got a life.

Gwen doesn't have a problem. She and her boyfriend Jasper just like to have a good time. One Saturday morning after a heavy night of drinking Gwen and Jasper arrive 45 minutes late for Gwen's sister's wedding. Completely drunk and high, Gwen and Jasper dance a little too roughly, knocking over the wedding cake. Gwen insists she will fix it, sheds her icing covered bridesmaid's dress, and hijacks the limousine in a search to replace the missing cake. She ends up driving into a house.

28 Days is a Dramedy film starring Sandra Bullock and directed by Betty Thomas, released in 2000. It explores Gwen's struggles to understand and accept her problem, and also explores the other patients she is in rehab with.

Definitely not to be confused with 28 Days Later.

Tropes used in 28 Days include: