Actually, I Am Him 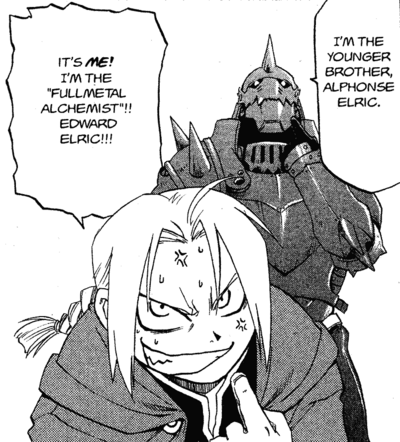 Hmm, think he might have had this problem before?

Obi-Wan: Obi-Wan Kenobi? Obi-Wan. Now that's a name I've not heard in a long time. A long time.
Luke: I think my uncle knows him. He said he was dead.
Obi-Wan: Oh, he's not dead. Not yet.
Luke: Do you know him?
Obi-Wan: Well of course I know him! He's me.

Often, the stranger is playing dumb about their true identity in order to assess the searcher's character and intentions, the idea being that the searcher's behavior will be more genuine in the presence of someone they perceive to be just an ordinary stranger. This can lead to a painful lesson for the searcher once he learns the truth about the stranger, making this a favorite form of introduction among Trickster Mentors.

Can also be Luke, I Am Your Father if the sought-after character is the searcher's parent. See also You Have No Idea Who You're Dealing With, Right in Front of Me, King Incognito, Actually, That's My Assistant, I Am One of Those, Too, and And That Little Girl Was Me.

Not to be confused with Because I'm Jonesy.

Given that this trope is about a plot twist, there be spoilers.

Examples of Actually, I Am Him include:

Isn't he right here?...Oh, That's right, I have yet to introduce myself. Well, normally with business associations, I just leave without having ever said my name...

L: "I've found that people who try to find me usually fall for this."

Wedge: "You recall mentioning that you'd killed plenty of Rogue Squadron members at Brentaal, and that Wedge Antilles would be back?"
Lorrir: "Y-yes?"
Wedge: "You were right. I'm Wedge Antilles. I'm back." * shoots him*

Biggles: Fair hair ... blue eyes ... as a matter of fact, he was about my build.
The Nazi: He must have been very like you.
Biggles: No one has ever mistaken me for him.

Oghren: Seems that the requirements have gone way low.

Bugs Bunny: What's up, Doc?
Elmer Fudd: Shh... There's a wabbit down there, and I'm trying to catch him.
Bugs: What do you mean a "wabbit?"
Elmer: Wabbits! Wabbits! You know, with big wong ears!
Bugs: Oh, like these? (shows his ears)
Elmer: Yeah, and a little white fwuffy tail!
Bugs: Like this? (shows off his tail)
Elmer: Yeah, and he hops awound and awound.
Bugs: Like this? (hops around)
Elmer: (to the audience) You know I bewieve this fella is an R. A. B. B. I. T. (to Bugs) Pardon me, but you know, you look just wike a wabbit.
Bugs: Ehhh, c'mere. Now listen, Doc, now don't spread this around, but... uhhh... confidentially... I AM A WABBIT!!!

Superman: You fooled them all. Even I thought you were him!
Lord Batman: I am him.

Peisistratus: What do you get from the land you farm?
Farmer: Nothing but aches and pains. If only Peisistratus and his tax collectors would take their fair share of those.

Lady: Aren't you Brother Kimball? And isn't that coffee you're drinking?
Kimball: Ma'am, you're the third person today who's mistaken me for that old SOB.