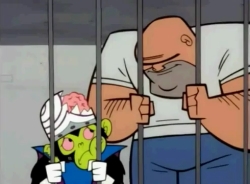 The idea that rape is common in prison. It is used in a number of ways:

No real life examples, please; this is a rape trope. Tell the police, not us.

Examples of Prison Rape include:

Retrieved from "https://allthetropes.org/w/index.php?title=Prison_Rape&oldid=1940407"
Categories:
Cookies help us deliver our services. By using our services, you agree to our use of cookies.