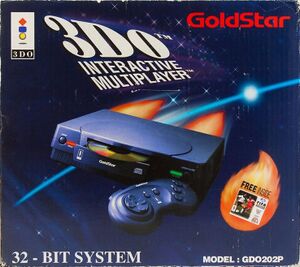 A variant of the console by GoldStar.

The 3DO Interactive Multiplayer (more commonly known as the 3DO), released by the now-defunct 3DO Company in 1993, was an attempt to create a standardized video game console format. The 3DO Company was founded by Trip Hawkins, the founder of Electronic Arts, which he left to form 3DO.

Despite a great deal of hype (to the point that it was named Time Magazine's "1994 Product of the Year") and graphics far superior to anything else at the time (the Atari Jaguar had theoretically superior specs, but the games released during its commercial life were far from impressive), the 3DO never took off. The console launched with a price of $700, making it one of the most expensive systems of all time; also, the early games squandered the system's impressive specs on Full Motion Video.

Nevertheless, 3DO's shrewd business model made it decently profitable, and a very liberal licensing policy gave the system a surprisingly large number (if heavily varying in quality) of third-party productions, with Crystal Dynamics, 3DO themselves and Electronic Arts releasing some very solid titles. However, this didn't save it from the hype for the superior Sega Saturn and PlayStation systems just around the corner, and the 3DO format died a quick death after a much-hyped 64-bits add-on called the "M2" ended up being unceremoniously cancelled by its buyer.

3DO tried to re-brand itself as a third-party developer (much like the Sega of today), but went bankrupt in 2003.

Retrieved from "https://allthetropes.org/w/index.php?title=3DO_Interactive_Multiplayer&oldid=1664358"
Categories:
Cookies help us deliver our services. By using our services, you agree to our use of cookies.