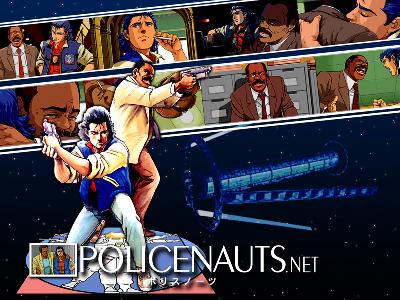 Ladies and gentlemen, the story you are about to hear is copied. Only the names have been changed, to protect our attorneys.

Spiritual Successor to Hideo Kojima's interactive Visual Novel cult classic Snatcher, Policenauts is basically what you get when you let Konami's resident sci-fi author retell the story of Rip Van Winkle using the characters from Lethal Weapon... then forget to tell America for about a decade until Comrade Slowbeef and pals whang the fandom upside the head with the digital equivalent of the Rosetta Stone.

In the year 2010, the United Nations handpicks five police officers from around the world to undergo astronaut training and become Policenauts, specially trained to bring law and order to Earth's first orbital colony Beyond Coast. But tragedy strikes in 2013, when LAPD representative Jonathan Ingram (above, with mullet) has an accident with his "Yuri" spacewalking vehicle and spends the next 25 years drifting in low Earth orbit thanks to his suit's emergency cold sleep system. Upon finally being recovered by the probe Propaganda, he returns to Earth and sets up a floundering Private Detective agency after developing a severe case of cosmophobia.

Fast forward three years after that, to 2040. Jonathan's ex-wife Lorraine, having exhausted all her options on Beyond, turns to him for assistance in finding her new husband, high-ranking Tokugawa Pharmaceuticals scientist Kenzo Hojo. Shortly after bequeathing to him the only clues to his absence - a cut leaf and some pills with a defaced watermark - Lorraine is killed by a white-bleeding motorcyclist's car bomb. Convinced that this is much more than a simple missing persons case, Jonathan must put aside his cosmophobia and return to Beyond - a radically changed place where the Policenauts are a faded memory, their BCPD replacements utilize Powered Armor and in-vitro-fertilized "Frozeners", and the Tokugawa conglomerate runs enough of the show that Ingram can only draw upon the resources of the long-obsolete Vice unit, headed up by fellow ex-LAPD ex-Policenaut Ed Brown (above, without mullet). The good news is, the Vice unit also includes Meryl Silverburgh, temporary FOXHOUND tattoo and all.

Building on many of Snatcher's strengths (the Visual Novel interface with shooting segments sprinkled in for good measure), Policenauts was first released for the NEC PC-9821 computer platform in 1994, with console ports for the 3DO, PlayStation, and Sega Saturn following soon after. Konami announced an English localization of the Sega Saturn version in 1996 (two years before Metal Gear Solid), but ultimately choose to cancel it when the developers allegedly (according to an interview with Kojima in the official strategy guide) found themselves unable to properly sync the English dialogue to the game's pre-animated FMV cutscenes. The Fan Translation linked above is actually of the PS version - an ordeal in itself, voice recording notwithstanding, as translators ran up against a variety of oddly compressed graphics and sequences that would go outside the grain for only one or two parts of the game. The patch finally came out on Hideo Kojima's 46th birthday (August 24, 2009), though, in what Something Awful forumer Slowbeef (the "Comrade" part was appended following a Russian site catching wind of the project) calls a Beta release: aside from the Japanese-only audio, the game is not only completely playable in English but is polished enough to be considered as good as any official release could have been.

LOOK > TROPES
Retrieved from "https://allthetropes.org/w/index.php?title=Policenauts&oldid=1684640"
Categories:
Cookies help us deliver our services. By using our services, you agree to our use of cookies.