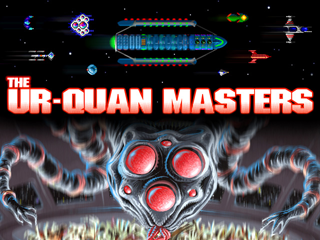 Attention troper — heed this recorded message! This works page speaks with the voice and authority of the Ur-Quan!

Star Control is a series of Shoot'Em Up/Action Adventure games built around space battles modelled on but expanded from Space War.

As in Space War, a battle in Star Control involves two armed spaceships in a 2D space with a planet in the middle. Unlike Space War, there is a range of ships available, each notionally representing a different alien race and possessing a distinct appearance, handling characteristics, and weapons.

The original Star Control was a turn-based strategy game, pitting Earth and the Alliance Of Free Stars against the evil Ur-Quan Hierarchy. The game also included Melee mode, which skipped all the Resource Gathering and territory control stuff, and gave you a team consisting of one ship from each of the races on the side you had picked. Many players only ever played Melee.

Star Control II: The Ur-Quan Masters added a story mode, an RPG/Action Adventure game akin to Starflight, set twenty years after the Alliance of Free Stars lost the war featured in the first game. The player character travels the galaxy searching for a way to overthrow the Ur-Quan, meeting (and, if conversations went badly, battling) most of the alien races mentioned in the first game, discovering several new ones and sooner or later learning that there are worse things than the enslaving Ur-Quan, and they're about to take an interest in mankind. Gameplay follows many RPG tropes, albeit at a different scale: for "character", read "ship"; for "party", read "fleet"; for "town" or "dungeon", read "planet". The game is highly regarded for its engaging story and for the inventiveness and humor of the world-building. It also included a Super Melee mode, which allowed you to choose a fleet of up to 14 ships from either game and battle (still one-on-one) against a human or computer-controlled opponent.

Star Control 3 was meant to create a game dynamic that mixed the strategy of the first with the Action Adventure of the second. Unfortunately, it was made without the involvement of the series' creators, and it was not very well received by the fanbase.

Retrieved from "https://allthetropes.org/w/index.php?title=Star_Control&oldid=1936907"
Categories:
Cookies help us deliver our services. By using our services, you agree to our use of cookies.