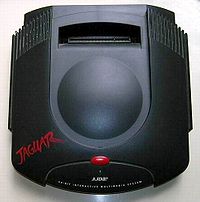 Still lingering in the console race years after losing the gaming public's trust and playing a significant part in The Great Video Game Crash of 1983, Atari decided to chip in with a new effort to get a head start on the next generation in gaming. They hired some outside help to engineer both an experimental 32- and 64-bit console, codenamed "Panther" and "Jaguar" respectively. The 32-bit Panther was scrapped in favor of the Jaguar, and the system was out the door as early as 1993 with a price of $250 and an aggressive marketing campaign against its competitors, the 16-bit SNES and Sega Genesis and the 32-bit 3DO, urging consumers to "do the math" and choose the 64-bit system instead (because having more bits meant the system was obviously superior).

Unfortunately for Atari, many gamers did do the math and noticed that while some of the system's chips could pass 64-bits of data through, no actual 64-bit words were processed or calculated, it used a combination of 32-bit 16-bit words, and most of Atari's games looked hardly any better than those on its competitors, including the 3DO and even the Super Nintendo, especially in terms of 3D graphics. The eventual appearance of the Sony PlayStation, Sega Saturn, and Nintendo 64 with their sleek 3D visuals and more intuitive controllers condemned the Jaguar to a not-so-early grave, and resulted in the company withdrawing from console manufacturing altogether. It still has a cult following, which even caused the Jaguar source code to be released online so fans could make homebrew games.

The Jaguar had a CD add-on, unsurprisingly called the Jaguar CD. It had only 15 games released for it (over twice as many were available for the failed Sega 32X), didn't add any extra hardware capabilities (by comparison, the Sega CD included upgrades to the console's graphics and sound chips), and its abysmal hardware design and worse production quality gave it a reputation for being the worst in the history of console add-ons.[1]

Games
Tropes invoked by the hardware
Retrieved from "https://allthetropes.org/w/index.php?title=Atari_Jaguar&oldid=1562061"
Categories:
Cookies help us deliver our services. By using our services, you agree to our use of cookies.