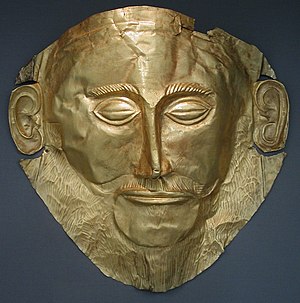 Golden Mask from Mycene, known as the "Mask of Agamemnon"

The ancient Greek play Agamemnon is the first of a series of tragedies in the Oresteian Trilogy by Aeschylus.

Agamemnon himself is the King of Argos, who is returning home from the The Trojan War after enslaving Cassandra, the daughter of the Trojan king, Priam. Cassandra is forced into being his concubine. Much to the distress of his wife, Clytemnestra when he finally returns home. Clytemnestra welcomes him back as if nothing bothers her, but is unable to keep the bitterness out of her tone when she speaks of how long he had been gone. Stringing out extravagant tales of how much she missed him, in an attempt to make him feel uneasy and guilt stricken. She then orders maids to retrieve a purple cloth from his chariot, and spread it on the palace floor beneath his feet. But Agamemnon refuses to step on it.

When Clytemnestra speaks to him later she tries to convince him to walk on the purple carpet, comparing it to the sea. However, to her the carpet is symbolic. The 'Sea' she speaks of is the family feud, and the 'purple dye' is blood shed for revenge. She continues to speak in thinly veiled metaphors of his impending fate, however Agamemnon never catches on. He finally re-enters the palace after much berating from Clytemnestra, when he is out of sight she then utters a terrifying cry of triumph that her plan is coming together. She quickly gives a prayer to Zeus so that her vendetta goes off without a hitch, and she follows him.She had been planning her husbands murder in the ten year long absence he was fighting in the war. During which she was having an affair with his cousin Aegisthus, who believes himself to be the rightful ruler. Clytemnestra is also vengeful against her husband for sacrificing their daughter Iphigenia.

Meanwhile we learn that Cassandra became possessed by the god Apollo, who gifted Cassandra with the power of clairvoyance so that she can foresee future events, after she promised to return his love. But when she broke her promise, Apollo cursed her so that no one who hears her prophesies will believe them until it's too late.

Cassandra has a vision of the walls of the palace dripping blood, Agamemnon's dead body and a sword in Clytemnestra's grasp. She also sees her own dead body lying still beside the king. She tries to warn the Elders of this horrible prophecy, but they are unable to understand what she's saying. Cassandra resigns to her fate, gives a prayer that she is given a quick death and enters the palace. Soon after the death-shriek of the king is heard; the Elders debate rapidly what to do; and the palace doors open to reveal Clytemnestra and the bleeding corpses of Cassandra and Agamemnon. Even though the Elders know that they should condemn Clytemnestra for her actions, the situation of her grief and suffering for years are making them unsure.

Aegisthus arrives to the scene and offers thanks to the gods. He is described by the Elders as a coward who refused to serve in the war, a lecher who seduced the king's wife in order to steal the thrown back. However, he tells the horrifying story of what Agamemnon's father Atreus, did to his father Thyestes, we realize that the same obligation which drove him to plot vengeance on the son of Atreus is exactly the same as that which now lies upon Orestes.

Aeschylus does not praise or excuse Aegisthus; but his insistence on presenting his case fairly ensures that the urgency of the central theme, What is justice? Is further heightened by the closing scene of the play.

Challenged by the Elders, Aegisthus makes a show of force; Clytemnestra pleads for restraint; and the Elders withdraw, shouting threats and defiance.

Agamemnon is the Trope Namer for:
Tropes used in Agamemnon include:
Retrieved from "https://allthetropes.org/w/index.php?title=Agamemnon&oldid=1933695"
Categories:
Cookies help us deliver our services. By using our services, you agree to our use of cookies.