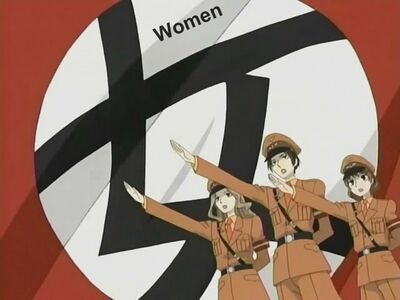 We swear to purge this earth of disgusting male pigs!

A character whose feminism is drawn only for the purposes of either proving them wrong or ridiculing them.

More likely to fight an imaginary male conspiracy rather than actually helping disadvantaged women, often being an out-and-out misandrist and often have exaggerated beliefs.

No real life examples, please; real people are not crafted for a specific purpose.

Examples of Straw Feminist include:

Retrieved from "https://allthetropes.org/w/index.php?title=Straw_Feminist&oldid=1939970"
Categories:
Cookies help us deliver our services. By using our services, you agree to our use of cookies.