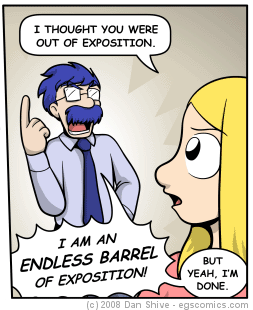 A character whose purpose is to explain the plot. Ostensibly, this is for the benefit of the protagonists, but most of the time their real reason for existing is to provide Exposition to the audience, sometimes to the point of an Info Dump. This is why they spend so much time explaining things the protagonists already know. Popular in Science Is Bad stories, where you can bet the Mad Scientist in charge will have a tape recorder with him at all times that he's always dictating his progress to, Mr. Exposition is also an essential component of the Instructional Dialogue. In spite of the name, this is an equal-opportunity position, as the many female examples below demonstrate.

The Watson—especially if Constantly Curious—may force Mr. Exposition into this role.

Examples of Mr. Exposition include:

In the Season 2 finale, "Curtain Call," when Murdock got shot in the shoulder, Hannibal spent the majority of a scene explaining why bits of cloth and such caught in the bullet hole were more likely to cause an infection than than the bullet itself. Then he explained what would happen to Murdock's body as the infection began if they could not get supplies in time.

Retrieved from "https://allthetropes.org/w/index.php?title=Mr._Exposition&oldid=1853694"
Categories:
Cookies help us deliver our services. By using our services, you agree to our use of cookies.