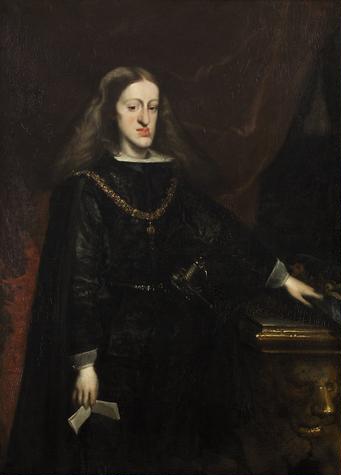 The result of several generations of Kissing Cousins and other inbreeding: Charles II "The Bewitched" of Spain. Sadly, neither his mind nor his health were any better than his looks. And, yes, his tongue is poking out of his mouth.

Nearly every family of a decent size has at least one relative who's a little... strange. Maybe it's Great-Aunt Enid and her collection of carefully mounted cat skeletons (no one knows where she gets them—they just appear), or second cousin Dolf's extensive research library on famous serial killers, complete with memorabilia he buys off of eBay at outrageous prices. (Those clown paintings he adores are particularly creepy.)

Not much of a problem, usually, as long as one is careful not to get cornered by them at family reunions - but what happens when your family are hereditary rulers of some kind? Kings, Emperors, High Priests, whatever you want to call it, the point is you have power. Power that belongs to your family, and your family only. Sometimes, due to random chance - or not-even-remotely random deliberate action - Great-Aunt Enid or second cousin Dolf ends up with the royal prerogatives.

What follows is a reign of grotesque excess, blood, and terror. Eventually, however, King Dolf or Queen Enid will leave the throne, unless they've done something extraordinary... That should be the end of the problem, right? Not necessarily. In fact, not even probably. Dangerous insanity in the ruling line rarely appears in a single isolated case. Nope. Chances are the whole family line is just as tainted somehow, which means that sooner or later - probably sooner - along will come Queen Enid II and King Dolf III, and the whole mess will start up all over again.

This may continue for a good many decades or even centuries, with each new generation crossing its fingers that they get one of the "good" rulers from the line and not one of the "iffy" bunch. If you are unfortunate enough to get stuck with one of the blood-drenched loonies, one common solution is to go find someone else from the same family who didn't get hit with the crazy stick, or at least not whacked quite so hard, and put them on the throne instead of Enid or Dolf. This is where disgraced half-brothers and exiled princes/princesses come into play. Unless something permanent is done about the family problem, however, this is most likely just a temporary solution. Give it a generation or three and it's back to Queen Enid IV and King Dolf VI.

One not-at-all common solution is to just get rid of the "absolute hereditary power in the hands of a single individual" government setup, but that's easier said than done; switching from monarchy to republic (be it aristocratic or democratic) on the fly is a tricky job best not undertaken by amateurs and perhaps not possible at all depending on your country's power structure, economic setup, or general level of civilization. (A more feasible solution would be the replacement of absolute monarchy with constitutional monarchy, or at least elective monarchy- but somehow nobody seems to think of that outside of real life. Of course, even in the real world it took millenia, plus the right set of legal, cultural, and social conditions, for these ideas to take hold.) Sometimes the problem can be dealt with by swapping out the old family and swapping in some new group, but check the new line carefully for nasty skeletons in the closet before you give them the keys to the kingdom. Generally, though, if you're serious about fixing the "recurring insane monarch" issue, you'll have to figure out what's at the root of the problem and deal with it.

In fiction there are several common reasons why a royal family might be prone to madness.

Whatever the reason, your rulers are bonkers, at least as far as objective outside observers are concerned.

Note that royal/imperial insanity is Truth in Television often enough that it can be a bit frightening.

The Caligula is a singular example of this trope, leaving out the familial tendencies, although they arguably applied to him too. In the Blood doesn't apply only to royals, but is one of the many reasons why a royal family can have recurring madness problems.

Examples of Royally Screwed-Up include:

Retrieved from "https://allthetropes.org/w/index.php?title=Royally_Screwed-Up&oldid=1917845"
Categories:
Cookies help us deliver our services. By using our services, you agree to our use of cookies.