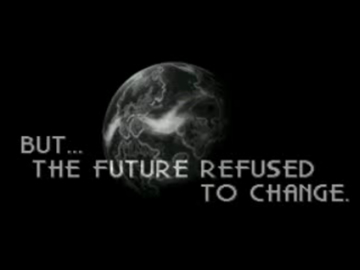 And you're still hungry.

A prophecy (or in Time Travel, something that is known to have happened in the past) comes true despite all attempts to prevent it (and often because of those attempts).

Often happens with an obvious (or not so obvious) Prophecy Twist on the language used in the prophecy. As old as Oedipus Rex, used by Shakespeare and Tolkien, and still fresh at least as recently as the mid-80s sitcom!

Depending on the mood of the series, the final fulfillment of the prophecy may or may not be a Downer Ending. Sometimes, the heroes still manage to put right the wrong the prophecy promises. In such situations, they usually conclude that fate only said something bad would happen, not that they couldn't eventually right it. An Aesop usually follows about free will being stronger than destiny.

One technical term for the Time Travel version of this trope is the predestination paradox, a concept very popular with the Ancient Greeks, who believed You Cannot Change the Future. There is only one possible future, and if you think otherwise, it's because you were destined to take a different path.

Sometimes this can turn out to be odd in certain Freaky Friday type Time Travel stories. There can be a gazillion outcomes for everyone...except the one thing that the Time Traveller wants to change. (saving one particular loved one, etc.) So everyone else in the cast may have good or bad results in different Alternate Timelines; but Fate is saving all of its energy to prevent a positive outcome for one single person.

Note that this is the exact inverse of the common Western portrayal of fate as an outside force of some sort, acting to "guide" outcomes in real time as they progress—both of these opposite notions fall under the concept of "You Can't Fight Fate".

If the prophecy comes true because of being made (in the most common scenario, because of everyone's attempts to prevent it), it's a case of a Self-Fulfilling Prophecy. If the universe appears to self-correct any attempt at change, then Ontological Inertia is in play. In any case, on the Sliding Scale of Free Will vs. Fate, stories where You Can't Fight Fate register as Type 1 on the scale.

Since it's Older Than Dirt, most examples rely on a Prophecy Twist. If time travel is involved, it's called You Already Changed the Past. See also Stable Time Loop and Prescience Is Predictable.

The Fatalist is characterized by their strong belief in fate.

Compare with Because Destiny Says So, But Thou Must!. Contrast with Screw Destiny and Immune to Fate.

Examples of You Can't Fight Fate include:

Retrieved from "https://allthetropes.org/w/index.php?title=You_Can%27t_Fight_Fate&oldid=1880872"
Categories:
Cookies help us deliver our services. By using our services, you agree to our use of cookies.