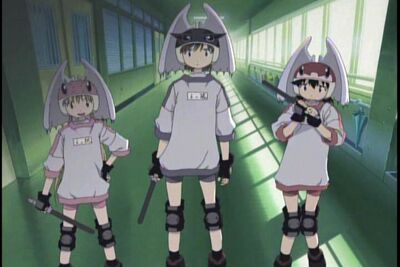 Alien Nine is a science fiction manga and anime about a trio of 6th grade girls (Yuri Otani, Kasumi Tomine, and Kumi Kawamura) who are selected by their elementary school to become alien hunters. Donning special uniforms, with rollerblades and helmet-like creatures called Borgs that they wear on their heads, the girls are tasked with hunting down and capturing the marauding aliens that periodically threaten their school. What starts off as a cute little shojo story turns disturbing rather quickly when one of them gets eaten by an alien and suspicions about the teacher running the program and the principal arise.

Tropes used in Alien Nine include: