Dark and Troubled Past 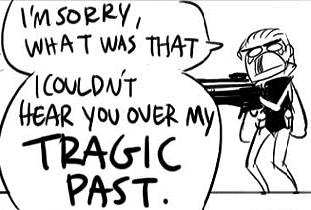 TRAGIC, we tell you!

Stock Backstory for a character. Much like a Mysterious Past, except more tragic and troubled. Don't expect it to be revealed all at once, or sometimes at all. It usually gets revealed in small doses through a Troubled Backstory Flashback as the story progresses; possibly in a Flashback Nightmare where a happy memory transforms into a slaughter. Often used as a Freudian Excuse for an antisocial character's Jerkass tendencies or quiet stoicism. Still, it is understandable that the character wants to keep it secret because They're Called "Personal Issues" for a Reason, after all.

The root causes are usually:

Usually involves one or more of the following:

Expect to see the above overlap for extra Angst or Wangst.

This can lead to either becoming an Anti-Hero or Hurting Hero. For villains, this is a Start of Darkness.

The step-up of this trope is the Dysfunction Junction, where the whole cast will have one of these and suffer from it, too (and don't expect them to get better). If the afflicted character is in a law enforcement profession, see Standard Cop Backstory. When paired with a Nice Guy or gal with a happy upbringing, you can expect...interesting results.

Examples of Dark and Troubled Past include:

Retrieved from "https://allthetropes.org/w/index.php?title=Dark_and_Troubled_Past&oldid=1872449"
Categories:
Cookies help us deliver our services. By using our services, you agree to our use of cookies.