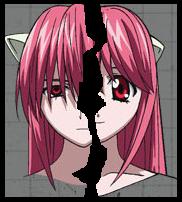 In real life, Dissociative Identity Disorder (or DID) is a condition believed to be most common among survivors of sexual and/or physical abuse that occurs in their childhood/teenage years. There is some controversy as to whether or not it even exists. Also, those who have it often consider it to be closer to Mind Hive than this trope. As it is understood to modern psychology, the condition is thought to sometimes result when a child/teen copes with abuse by convincing themselves that it's happening to someone else; as such, the trigger is generally some experience the child/teen is trying to dissociate themselves from, by means of creating an "alter" who gets put in charge. Note that without recieving psychological counseling the symptoms will carry over into adulthood. The individual has no control (at least initially) over when the personalities "switch," and may not initially remember what happens to them while they are switched. To put all that in Tropese: you go to your Happy Place while some poor Red Shirt has to deal with the Trauma Conga Line or Humiliation Conga. There are also some individuals who claim to have "healthy," or non-traumatic/trauma-induced, multiplicity, though the existence of that is even more controversial among scientists. More info on healthy multiplicity can be found here.

But that's not entertaining, so television does it differently, and in several different ways. Two (or more) personalities may be sharing memory or not sharing memory or have access to each others' memory as external to their own in symmetric or asymmetric fashion, they can switch at will or involuntary and be in clear war or some form of pact. It even may be the very same personality (i.e. having the very same mind, memory and desires), but changing 'behavior mode' between several clearly distinctive states.

Characters with a split personality are surprisingly common in fiction, but most of them don't quite match the textbook definition of DID. In older media, it will often be called "schizophrenia" even by psychologist characters.. (The word schizophrenia literally means "split mind," because a main symptom is scattered, unconnected thoughts. It's more like being on a really bad drug trip, and can actually be induced via crystal meth overdose (caused by too many stimulants in the brain at once) -- but please don't try this at home.)

If the two personalities are aware of each other, expect a Gollum Made Me Do It situation to develop. Resolving it may require the weaker of the two to say "I'm Not Afraid of You!" If the Split Personality gets its own body, it becomes either a Literal Split Personality or an Enemy Without (if said personality is antagonistic or evil).

Examples of Split Personality include:

Retrieved from "https://allthetropes.org/w/index.php?title=Split_Personality&oldid=1954696"
Categories:
Cookies help us deliver our services. By using our services, you agree to our use of cookies.