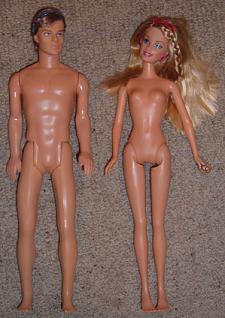 In comics, TV shows, and movies aimed at general audiences, characters in a state of undress will usually lack ... certain anatomical features.

If a female is shown naked from the front, nipples may or may not be drawn. Variations include complete absence, nipples absent but areola shown, nipples drawn but areola lacking, and both nipples and areola being drawn. The crotch will almost always be completely featureless, with not even a dark patch to represent pubic hair. This is sometimes oddly coupled with drawing "clothing" so thin and skin-hugging that it displays nipples and labia in prominent relief, making characters more naked when they're clothed than when they're unclothed.

Bare-chested male characters will often be drawn without nipples, and there will never be visible genitalia or crotch hair. They can also have the curious affliction of having the organ in question outlined, but transparent, or looking like the artist got carried away with the eraser.

In live-action Film and television, the same effect can be achieved by the actor wearing a flesh-coloured body suit, though usually the glimpses viewers get are too short to tell the difference.

Even with this, not having the requisite bits in some circumstances can be a good thing dependant on intent and audience and in 90% of all situations where this arises, having no primary attributes isn't a detraction unless you're paying too much attention to entirely the wrong thing.

Examples of Barbie Doll Anatomy include:

Retrieved from "https://allthetropes.org/w/index.php?title=Barbie_Doll_Anatomy&oldid=1775915"
Categories:
Cookies help us deliver our services. By using our services, you agree to our use of cookies.