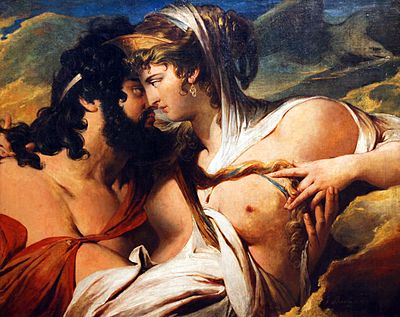 Zeus and Hera occasionally got it on, when he wasn't going after swans and such.

Nothing adds that certain je ne sais quoi to a storyline like a romantic or sexual attraction between siblings. Most of the time it may be merely implied, but sometimes it's laid out right in the open for the viewer to see. Its presence in a story usually adds a great deal of emotional intensity.

Frequently actual incest is avoided through the device of siblings who aren't really -- they're fostered, or step-sibs, or adopted. Thus, while in arbitrary terms of relationship they may be brother or sister, in "true" terms of blood they are not, and may pursue their chosen target with relative impunity. Often it's just an extreme version of the Childhood Friend Romance setup; male and female characters who normally couldn't cohabitate or possibly even interact normally with each other are 'forced' to but meet with an arbitrary contrivance preventing them from developing past it. The only difference is that the audience is more likely to accept the latter contrivance as believable.

Many sociologists and evolutionary psychologists believe that the instinctual aversion to incest has developed to avoid the pairing of rare, potentially lethal, recessive genes. The incest taboo is implemented through the Westermarck effect, in that growing up in proximity at a young age (through approximately six years of age) renders it sufficiently likely that the persons are siblings, to trigger the instinctive aversion. Many close tribal and small village communities marry outside of the tribe or village, and many childhood friends end up unlucky, because of this. This would also explain why brother-sister incest was possible among Egyptian royals (where the girls were raised separately from the boys and didn't even meet until after puberty), while some European royal families such as the Valois faced extinction because the king and queen couldn't bear to touch each other - not because they were that closely related, but because they'd been brought up together since early childhood and thought of each other as siblings.

Although the Japanese have just as much of an incest taboo as any other culture, there does not seem to be any automatic assumption of tragedy surrounding incestuous relationships in anime, as there would be in most Western productions. It may be shown as sad, improper, and/or perhaps even reprehensible, but participants are no more likely to come out to a bad end than any other characters in the story. A supposed Japanese legend which states that star-crossed lovers are reborn as siblings probably has something to do with it as well.

It is also very common in Japanese works, at least, to see a girl address a boy she's interested in as onii-sama, the ultra-respectful form of... 'big brother'. For example, in My-HiME, Munakata Shiho addresses Tate Yuuichi in exactly this way, and harbors an obsessive desire for him that leads to some fairly serious jealousy of her rival (Tokiha Mai). This is also a common trope of bishoujo games. Of course, this is more a Japanese language trope; onii-sama or Onee-Sama ("big sister") is a fairly standard thing to call someone older than you that you respect.

Contrast with Parental Incest, where the parent/child power dynamics can make it even squickier. Not to be confused with Double In-Law Marriage, where both of the couples are Not Blood Siblings but siblings-in-law. May show up in works with a Younger Sibling Fetishization.

NOTE: This trope is for actual cases of incest in-story. Incestuous subtext goes in Incest Subtext.

Examples of Brother-Sister Incest are listed on these subpages:
Retrieved from "https://allthetropes.org/w/index.php?title=Brother-Sister_Incest&oldid=1960175"
Categories:
Cookies help us deliver our services. By using our services, you agree to our use of cookies.