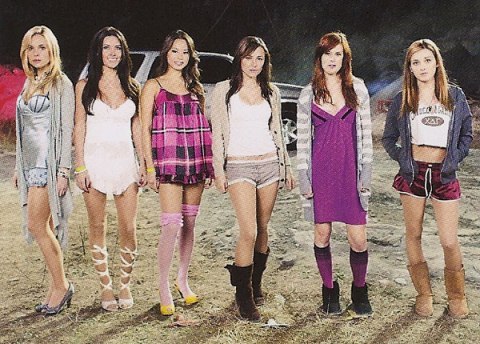 Yes, we always get out of the house like this. Why?

A Sorority Woman has similarities to a Cheerleader, in that she is part of a close knit, almost exclusively-female group, is almost by definition drop-dead gorgeous, and generally presumed to be loose in morals. The main advantage in films, however, is that, as almost every Sorority Woman is above the age of consent, it's way easier to show them in sexy lingerie, drinking alcohol, taking a shower (maybe even without a Modesty Towel!), or actually having sex.

And, to top it all off, they often used to be cheerleaders in their former days—some of them are still cheerleaders! -- which makes the stereotype even more perfect.

Examples of All Guys Want Sorority Women include: