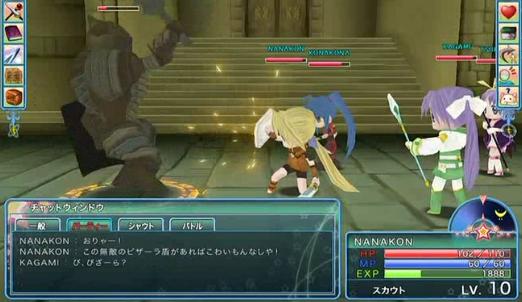 The Massively Multiplayer Online Role Playing Game, or MMORPG is, as the name suggests, a roleplaying game with hundreds, thousands, or even hundreds of thousands of players all connected through the Internet. Most of these games are "pay-for-play", with gamers registering an account with their copy of the game and buying play time in monthly increments.

The MMORPG has its roots in text-based Multi-User Dungeons (MUDs) and Multi-User Shared Hallucinations (MUSHes) originating in the mists of time. Eventually, sprite-based graphics were introduced in 1991 with Don Daglow's Neverwinter Nights (not to be confused with the traditional computer RPG of the same name by Bioware). While games like Meridian 59 and Ultima Online kept the genre alive throughout the 90s, it wasn't until 1999 that EverQuest put the entire genre on the map by introducing a gigantic and deeply fleshed-out fully 3D world for players to explore from a first person or third person perspective. EverQuest would pave the way for which a great majority of the games listed below owe their conceptual existence to, though elements of the MMORPG are Older Than They Think, since they can be traced back to Dungeons & Dragons.

Mumorpugers add a social and collaborative element to standard gaming, which obviously alters the experience. It creates the possibility of team-based gameplay elements; as anyone can tell you, playing a soccer video game by yourself, with only the AI as company, is not nearly as fun, spontaneous or challenging as having friends over. Now imagine 40-a-side soccer, 'cuz MMOs can do that. MMORPGs provide quests or dungeons which can take dozens of allied adventurers at once (and bosses that require them), or "Player vs. Player" zones where duels or team matches can take place. The competition between "Guilds" (player-organized adventuring parties) can get heated (just a little), and there's always one more boss to kill or piece of loot to collect. Innumerable friendships, both online and in Real Life, have started or been maintained via MMO games. There's even a bit of an industry grown up around it, where people pay real money for in-game objects, currency or even characters; some companies discourage this, while others facilitate it or even make it part of their own economic model by selling such things themselves.

Having said that, you're paying a monthly fee, anywhere from $10 to $15, for this game. The math does line up; if you bought (say) Tales of Symphonia at $50 when it came out and then played it for 50 hours, all you need to do is play your MMO at least 15 hours a month to keep up the same monetary efficiency. And some people find 16 hours a week to be a slow pace. Nonetheless, the whole ongoing-fee thing does rankle gamers who are just getting into the genre for the first time. While free-to-play MMOs do exist, they often contain reduced content, or restrict certain features to people who are willing to pay. Furthermore, because an MMO company's livelihood is in those monthly subscriptions, it's in their best interests to make the game as draggingly slow, nitpicky, indirect or tedious as possible. Of course, get too un-fun and people stop playing, so MMOs are constantly figuring out ways to give you little achievements that keep you interested (to the point of allegedly employing "Skinner Box" operant conditioning techniques to keep you playing). Gotta Catch Em All is a big part of the genre's addictiveness: there's often a wide variety of Side Quests the player can choose to achieve, and pursuing them will often bring the player's character all the way up to maximum level. Finally, the team-based aspect of the game can make victory a dicey proposition; depending on the game and the situation, just a single Leeroy Jenkins can result in death for all forty of his teammates. In other words, you can lose even if you play perfectly, because someone else screwed up.

Note that not all massively multi-player games are Role Playing Games; for instance, PlanetSide is a Massively Multiplayer First-Person Shooter, Auto Assault was a Driving Game with RPG Elements, Drift City is what you get when The Fast and the Furious is turned into an MMOG, Second Life is a social environment, Shattered Galaxy is a Real Time Strategy with RPG elements, and Magic: The Gathering Online is a straight port of the Collectible Card Game where the only "Massive Multiplayer Online" part is the lobby where you connect with other players. Massively Multiplayer RPGs are the most common, so common in fact, most people actually don't realize that the first three letters of the term "MMORPG" refer to "Massively Multiplayer Online" and that there can very easily be such a thing as an MMOG that is NOT an RPG. Nowadays, if you refer to a game as an MMOG, the first thing people will think about is this.

Notable[1] games in this genre:

Note: As this is an index, make sure any added series don't have italics and are immediately after the asterisks. Don't link to any pages that don't exist. If you want a link, make the page first.

Retrieved from "https://allthetropes.org/w/index.php?title=Massively_Multiplayer_Online_Role_Playing_Game&oldid=1950282"
Categories:
Cookies help us deliver our services. By using our services, you agree to our use of cookies.